The Unsanitary Business of Sanitation – or, Would You Swim in This River?

What, you might ask, has a diagram of Joseph Bramah’s flushing Valve Closet of 1778 got to do with a rather strange boat on the Thames? Well, it is all to do with unexpected consequences.

Someone asked me the other day if Henry Austen’s London houses had flushing water closets and if, therefore, Jane Austen would have been familiar with them. I have no evidence for Henry’s loos, although his wife Eliza was a bit of a social climber so she may well have wanted one installed.

But Jane would surely have come across them, for they were becoming common in upper class homes from the 1780s, although they certainly were not cheap. The enterprising Joseph Bramah opened a showroom at 124, Piccadilly in the 1780s and charged 8 guineas for his ‘patent apparatus’. On top of that one had to buy valves, a cistern and pipework which could bring the cost up to £11 or more. Even so, by 1797 he claimed to have sold over 6,000 closets. He had rivals of course – seven more patents for flushing water closets were taken out by 1800. 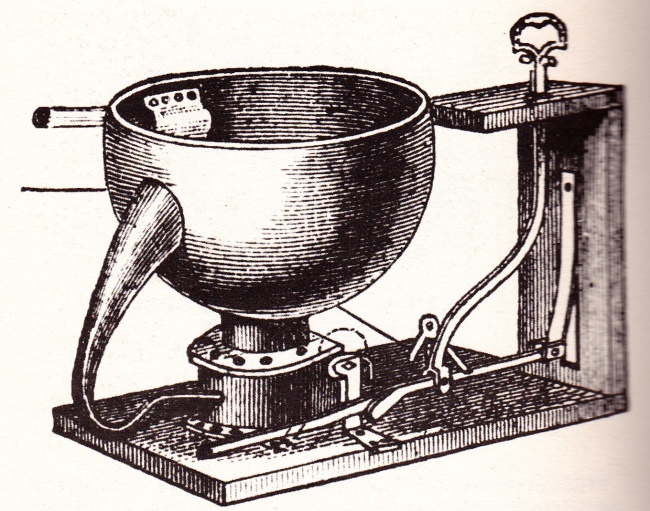 The illustration shows the Brahmah water closet out of its case, which would probably be made of mahogany, with a comfortable seat.

Even some hotels had water closets. The Pulteney Hotel, on the corner of Piccadilly and Bolton Street, was one of the best hotels of the day and when the Russian Grand Duchess Catherine stayed there she reported with approval on, ‘certains arrangements de commodité.’

We shudder at the thought of living without a flushing toilet but those early ones had  disadvantages that the humble privy with its pail, kept reasonably odour-free with the regular addition of dry soil or ashes and emptied regularly, did not. Of course, the horrors of unemptied cesspits, often actually in the cellars of houses and seeping into wells and watercourses, make the various problems with flushing water closets look trivial, but even so, the early models were difficult to clean and had very poor systems for stopping gasses coming back into the house – the u-bend had yet to appear.

But these were all technical issues that were overcome with improvements in design as the 19th century progressed. Much more serious was the effect of increasing numbers of water closets all flushing into drainage systems that were only intended to carry rainwater away to the Thames – and that is where this strange boat comes in. The Thames in the 18th and early 19th century might have had its problems, especially around the outlets of drains serving butchery areas, tanneries or the big markets, but then as now it was tidal and clean enough for a healthy population of fish, including the occasional salmon. And it was clean enough to enjoy boating trips on and to swim in – which is what the boat was for.

This print is from Ackermann’s Repository for June 1819 and shows the Royal Waterloo Bath. “This very elegant floating bath is stationed near the north end of the Waterloo-bridge, and has recently been built and completed…at very considerable expense. It contains a plunging-bath, 24 feet long by 8 feet wide, and two private baths, 10 feet long by 8 feet wide. The depth may be regulated at pleasure by machinery, which raises and depresses the bottom as required… To each of the baths are attached small dressing-rooms, commodiously fitted up, with proper persons to attend upon visitors. These baths are so constructed, that the water, being a running stream, is changed every two minutes. The terms of bathing…are extremely moderate… In the plunging-bath: one shilling; For the season: £1 11 shilings and 6 pence; In the private baths: 1 shilling and six pence; For the season: 2 guineas”

The article goes on to compare London’s paucity of bathing establishments with Paris’s numerous vapour, Turkish, Chinese and Tuscan baths. “Yet …we have a noble river filled with the purest and most wholesome waters in the world. The want of baths in London has led to the incommodious and indecorous practice of public exposure in the Thames.” By which I assume they mean nude bathing. Apparently, by letting the bottom of the boat down to increase the waterflow through it, glimpses of the swimmers – all men and all nude, of course – could be glimpsed from passing boats. It became a titilating extra ‘sight’ for the ladies taking pleasure boats on the Thames!

The proprietors and their customers must have felt the water was clean enough for swimming, although I doubt we would fancy a dip – what with all the drains running into it and the fast flow being restricted as more bridges were built across the river. But it was of perfect purity compared with what the river became once the fashion for water closets caught on in middle class homes.

Privies would be cleaned domestically, and the contents tipped onto the vegetable garden, or emptied by the night-soil men who carted the contents out to the numerous market gardens that surrounded London. The water closets, in contrast, simply flushed their contents into the same drains that carried the rainwater to the Thames, pouring thousands of gallons of untreated sewage straight into the river. The private problem of keeping the home free from waste was simply transferred to the public arena and became everybody’s problem – especially as much domestic drinking water came from the Thames via  huge waterworks such as the one at London Bridge which took 4 million gallons a day to supply its 10,000 customers.

The situation got rapidly worse, until the unusually hot summer of 1858 when the stench from the polluted river was so appalling that people fainted, cholera was rife and Parliament was closed. Finally there was the will to get something done and eventually Joseph Bazalgette’s amazing sewerage system was installed and the Thames could begin its long journey back to cleanliness.