A Flutter of Fans – A Very British Romance? 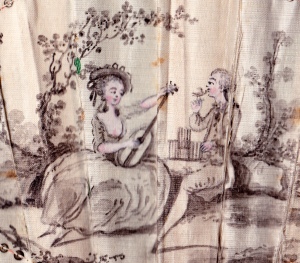 Watching the first episode of Lucy Worsley’s fascinating A Very British Romance last night I was inspired to look at my collection of 18th and early 19th century fans to see how they treat romantic love.

Fans were not only a practical necessity at hot and over-crowded balls and receptions, but they were also items of high fashion, conversation pieces and even sources of satire. And, of course, what better aid to romance for a strictly-chaperoned young lady who could deploy an entire range of flirtatious gestures with her fan – peeping over the top of it; hiding, then revealing her face; gesturing an invitation or snapping it shut sharply in rejection.

The earliest – perhaps 1770s – is a simple fan with widely spaced black and white sticks. The leaf is painted on one side only in black, white and grey, with tiny silver sequins sewn through the pattern. The man and woman in the centre have delicate touches of pink on their cheeks, hands and on her bosom. This is a very informal outdoor scene. She is playing a guitar and perhaps singing a romantic song. He is sitting with his legs astride the bank, and raising a small bird to his lips, apparently to kiss its beak. A love bird? From their intense exchange of looks it is quite clear that hers are the lips they would both wish he was kissing.

The most modern (c1818?) is also outdoors. It is a detailed hand-painted and gilded scene set in the parkland surrounding a large country house. The young lady in the centre is gathering flowers which she is collecting in the bonnet which she has casually hung from a bush – perhaps an indication that she would like to shed a few more items of clothing if the right circumstances arose.

On the other hand, a lamb, a symbol of innocence, is sitting by her side. A young man, his gun over his shoulder and his ammunition pouch at his side, strides off on the other side of the lake with his dog at his heels. He is off hunting – but what or who? He is certainly very aware of the young lady and I would hazard a guess that she is just as aware of him. No doubt she set out early to compose herself into just this charming and innocent pose for his benefit. 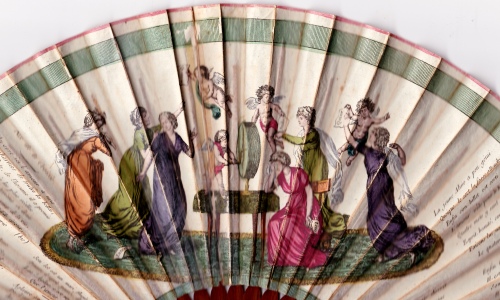 Now for a fan which I found in circumstances which I can only call romantic, if not downright spooky. I was writing The Piratical Miss Ravenhurst, the last of my Scandalous Ravenhurst series. My heroine was called Clemence – not the most common of English names. I was halfway through the book when I visited an antiques auction and spotted the handle of a fan poking out of a mixed lot of odds and ends. It had no loop on it – an almost infallible sign of an early fan – so I took a quick look and put it back before anyone else saw me taking an interest! In the event I got the whole lot for under £20 and when I had a good look at the fan I could tell it was not only late 18th century, but also French. The scene shows six young women in a lottery for love. The cupids draw a description of the virtues the lover of each will possess, described in very difficult old French in verses around the edge. (I have to thank fellow author Joanna Maitland for the translations!)  Poor Isis is in a hurry to receive her prediction – but her lover will have no virtues whatsoever. The next girl, “Aglaé, le coeur palpitant” – “her heart beating” – is destined for a lover who is articulate, but weak in spirit. Each girl in turn is told of a lover with two, then three, then four virtues. The final young woman is Clémence – my heroine’s name! And not only is her lover going to be handsome but he will surpass her hopes in every way.

To counter all that intense romance I’ll end with a rather more cynical view of life and love with a fan produced in 1797. It was doubtless intended to be a conversation piece. The central text, shown on a fan held up by a fat little Cupid, explains that this is:

“The LADY’S ADVISER, PHYSICIAN & MORALIST: Or, Half an Hours Entertainment at the Expense of Nobody”

It has six scenes around the edge. The four not visible in this view show how to “Catch The Spleen” – devote yourself to cats rather than people and seek out unpleasantness; “How to Avoid It” – enjoy life with a virtuous disposition, honour and moderation; “How to Plague Every-Body” – be dissatisfied with everything, declare war against the whole world and finally “How to Please Most Folks” – “Be just to your Enemy, Sincere to Your Friend, Constant to Your Mistress.”

On the left above is “How To Fall Violently In Love”: “Look upon or listen to an object which is agreeable to your mind & if you have the least sensibility you will most probably be completely over head and ears in pickle.”

On the right is “A Gentle Cure For It”. The young couple are  married now and have been interrupted at the breakfast table by a woman with a child in a basket. The scene has the caption “The Unwelcome Present” and from the expression on the man’s face, and his body language, one assumes this child is a bye-blow of his. The text reads:

“Look upon the Changeableness & natural inconstancy of Mankind, and you will find a Certain remedy, for the cure of your delusion.” Really rather a scandalous scene for a lady’s fan!