An English Poet in Georgian Malta

On my holidays this year I seem to have been bumping into the long arm of the Georgian navy at every turn. In August and September I wrote about encounters in Canada with Queen Victoria’s father, the Duke of Kent, and uncle, William IV when he was a naval officer. Last month I visited Malta and, standing in front of the Grand Master’s Palace in the heart of Valletta, found myself looking up at an unmistakable coat of arms on the opposite side of St George’s Square. 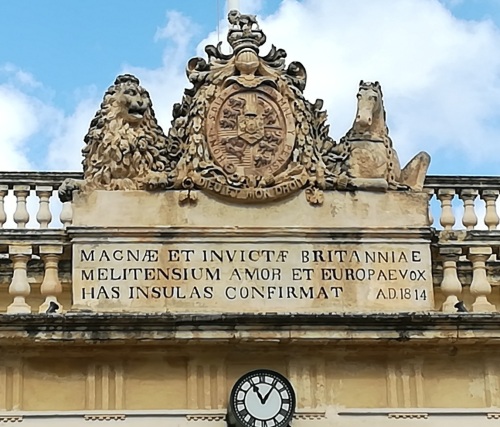 Even without seeing the date of 1814, this is clearly a Georgian coat of arms with the white horse of the house of Hanover as the other supporter with the British lion. So what was it doing there? I should have remembered that Malta was one of the Mediterranean islands that fell to the British after the defeat of the French navy at the Battle of the Nile in 1798. Translated the motto reads: “The love of the Maltese and the voice of Europe assigned these Islands to great and unconquered Britain. A.D. 1814.” No shortage of self-confidence there…

The Grand Harbour is one of the greatest harbours of the world, as the Knights of St John who had governed Malta for hundreds of years appreciated. In 1798 the French ousted the Knights and took over the supremely strategic island and even after the Battle of the Nile the French clung on to Malta, with some of the surviving ships of the fleet sheltering in the harbour. The British navy promptly blockaded the island. They were helped by the Maltese population who, although they were weary of the Knights’ rule, seem to have liked the French even less. In September 1800 the French ships tried to break out and were captured and the island fell. In 1814, the date on the coat of arms, Malta became a British colony, finally achieving independence in 1964.

Throughout history Malta has been of huge strategic importance in the Mediterranean which has made it all too often the target of fierce fighting – notably under the Knights and during the Second World War where its population endured the most appalling conditions and were awarded the George Cross as a tribute to their courage. With the arrival of the British in 1800 the island found an unexpected peace and prosperity. British merchants came in droves and it became an invaluable distribution point for British exports and the harbour and the presence of the fleet created huge commercial and employment opportunities. Not all was sweetness and light – the history of Anglo-Maltese relations is too complex to explore here – but the British presence for over 160 years has left a deep impression on the island.

The Grand Master’s Palace (below) became the seat of government and the residence of the British Governor.

Opposite is the Main Guard Building (below) which was built by the Knights in 1603 as the guardhouse for the Palace. The neo-classical portico was added, along with the coat of arms, in 1814.

So what was the poet Samuel Taylor Coleridge, perhaps now most famous for his poems The Ancient Mariner and Kubla Khan, to do with this? To my surprise I found a plaque to him on a building on the corner of St George’s Square. Apparently, in 1804, despite health problems and an increasing opium addiction, he travelled to Sicily and then to Malta where he found a post as Acting Public Secretary under the Civil Commissioner, Sir Alexander Bell. Despite being successful in the role he resigned and returned to England in 1806.

How Romantic Was An Elopement?

The romance and drama of an elopement is a popular theme in the historical love story, but it must have been an uncomfortable and expensive procedure, even without the risk of the rope ladder giving way and tumbling the young lady to the ground, or the furious father giving chase with his shotgun or horsewhip to chastise the bridegroom to within an inch of his life.

The post chaise was the fastest and safest way of evading Papa, although the popular name for these vehicles – yellow bounders – hints that expressions of passion must have been difficult as it swayed and lurched along the ill-made roads. How many nervous brides succumbed to travel sickness and second thoughts by the time the first inn was reached?

They also had a reputation for causing accidents because of the furious pace of escape, as a delightful print I picked up in Paris shows. A chaise and four, with the two postilions urging on the horses, leaves mayhem in its wake. A horse falls, its rider spills into the road and a pig bolts in terror while the lovers are lost to everything in their own private world inside the carriage.

“Everyone is familiar with the appearance of the old post-chaise, which according to the painters and the print-sellers, appears to have been principally used for the purpose of spiriting lovelorn couples with the-speed of the wind away from all restrictions of home and the Court of Chancery. A post-chaise was (so it seems nowadays) a rather cumbrous affair, four-wheeled, high, and insecurely hung, with a glass front and a seat to hold three, facing the horses. The original designers evidently had no prophetic visions as to this especial popularity of post-chaises with errant lovers, nor did they ponder the proverb, ‘Two’s company, three’s none’, else they would have restricted their accommodation to two, or have enlarged it to four.”

The gentleman planning an elopement would do well to visit his banker first – eloping in any style was an expensive business. There were the bribes of course – the lady’s maid, footmen who must turn a blind eye, the gardener whose ladder might be borrowed. The postilions, who would know at once that something illicit was afoot, would need their palms greasing liberally as would the landladies of the inns along the way if the happy, if queasy, couple wanted a good room for their first night of bliss.

The image above is from a book called Takings: or the Life of a Collegian. It is a satirical romp through the life of a young man by R.Dagley (1821). The picture is captioned ‘Taking Amiss’. Here the ‘hero’ Tom is eloping with his love – note the sign on the wall ‘To the Boarding School’ – the young lady is clearly below age.

At length the wished-for moment was at hand.

(Why should Time creep so slowly when we call?)

The cautious signal by the lovers plann’d,

Was heard and answere’d by the garden-wall

And now her drapery the nymph displays,

Now they [Tom has a friend along to support him] assist, and seat her in the chaise.

Not everything goes according to Tom’s plans, however: “One lodging, he conceived, for both would do, But Charlotte resolutely called for two”. Frustrated, Tom settles down to woo her, but has not succeeded by the time her furious relatives locate them and he finds himself facing a duel.

Another significant cost was the hire of the post chaise itself. A prudent lover would hire four horses, to achieve twelve miles an hour, and the chaise cost one-and-threepence a mile. On top of that there were toll gates to pay every few miles and food and accommodation. The canny eloper armed himself with Cary’s New Itinerary or an Accurate Delineation of the Great Roads (as does the writer trying to work out her hero and heroine’s route today!) This at least ensured that the post boys were not adding on a profitable mile here and there.

London to Gretna via Manchester, according to Cary, is 320 miles. That is £20 for the chaise and horses alone, at a time when a housemaid would be glad to earn £16 a year, all found.

Does an elopement still strike you as romantic? Would the thrill of the escape and the delight of being alone with the loved one at last outweigh the discomfort and expense? It is a while since I wrote an elopement into a book – I wonder, should I be thinking of another one?

If you are intrigued by the experience of travelling in Georgian Britain you can retrace some of the iconic routes in Driving Through Georgian Britain: the great coaching routes for the modern traveller. Available in paperback and ebook it allows the modern traveller to drive the Great North Road, the Bath Road, the Brighton Road and the Dover Road finding what remains and discovering stories of elopement, murder, good meals and bare knuckle fights along the way.