Walks Through Regency London, previously only available direct from me in paperback, is now in a revised edition on Amazon.com and Amazon.co.uk as well as all the other Amazon sites. Illustrated with original prints of the period.

Ten  self-guided walks will take you from Mayfair to Southwark and from prisons to palaces to an operating theatre by way of shops, parks and inns in the company of Jane Austen, Beau Brummell, Nelson and Emma, Wellington, the Prince Regent and many more of the famous and infamous of the ‘Long Regency’.

Trafalgar Square is one o

f the most recognisable London landmarks, a major tourist destination redolent with history, yet it is a relatively modern feature, only about 175 years old.

If Jane Austen were to find herself in Trafalgar Square today, I wondered, would she recognise anything at all? There are, in fact, only two landmarks she would be familiar with and one is the statue of Charles I which stands at the western end of the Strand looking down Whitehall to his place of execution. It was the work of Hubert Le Sueur in 1633 but was not erected here until 1675 after a perilous time buried to avoid being melted do 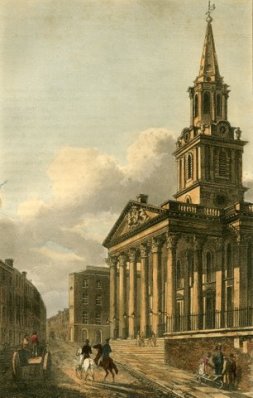 wn by the Parliamentarians. Eventually it was purchased by Charles II and the pedestal was designed by Christopher Wren.  You can see it here in this print from Ackermann’s Repository (1811) which looks eastward down the Strand.

The other landmark she would be familiar with is the church of St Martin in the Fields (built 1722-6) which is clearly recognisable in another Ackermann print of 1815. If Jane stood on the steps, what would she have seen?

The road was called St Martin’s Lane, as it is now, but the buildings on the left of the picture formed a frontage to the vast St Martin’s Workhouse which covered the space now occupied by the National Portrait Gallery.

Directly in front of her would have been a jumble of small buildings and lanes and then the yard of the Queen’s Mews. The King’s Mews occupied the site of the National Gallery.

The royal mews for falcons, horses and carriages, along with lodgings for grooms,  and all the associated workers, had been here since the reign of Edward I . The name of nearby Haymarket is explained by the huge requirements for fodder and bedding. William Kent rebuilt the main stable block in 1732 and a detail from Ackermann’s Microcosm of London shows something that looks more like a palace for horses than a stables. 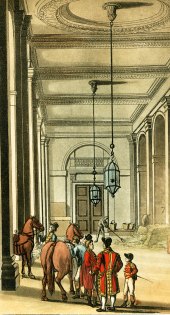 The land sloped to the south – the flatness of the square is due to terracing by Charles Barry in 1840 – and around the mews other buildings grew up like coral on a reef. Many of the buildings were let to private individuals for lodgings or shops, there was a menagerie, a store for public records and in the south-west corner, facing onto Cockspur Street, was the Phoenix fire engine, ready to gallop off to deal with fires – provided the buildings bore the mark of the phoenix showing that they had been insured with the company.

The most notable inn in the area was the Golden Cross, a major coaching establishment with a large yard. It lay under what is now South Africa House at the point where Strand meets Trafalgar Square.

Opposite was Northumberland House which can be seen in the print showing the Charles I statue. It was built in the 17th century for the Earl of Northampton before passing into the hands of the Percy family – the earls of Northumberland. Despite its antiquity and splendour it was demolished in 1874. The site now lies between Craven Street and Northumberland Avenue.

The area would have remained much as Jane Austen knew it until 1830 when demolition began to create John Nash’s Charing Cross Improvement Scheme. The National Gallery was built 1833-7 and includes one feature Jane must have seen in her lifetime but may not have recognised again – pillars from the recently-demolished Carlton House. Nelson’s Column was erected between 1839-43 and the statue added in 1843. The fountains and basins came next in 1845 (remodelled in 1939) and the four lions arrived in 1867.

So what would Jane have made of the changes? Probably she would be most upset by the disappearance of Spring Gardens just to the south of the square and now under Admiralty Arch. Once the home to picture galleries that she visited and charming tea shops and amusements, it now survives as a few yards of truncated street, a sad relic of Jane Austen’s London.