Receiving the News – the Telegraph System

In my blog posts about the weeks leading up to the battle of Waterloo I mentioned how long it took for the news of Napoleon’s escape from Elba to reach Paris. This was particularly surprising because the French had a magnificent telegraph system – defeated on this occasion, just when it was needed most, by poor visibility. The first visual telegraph system was the invention of Claude Chappe, a French engineer, working with his brothers. The French government seized on the invention and installed a network of 556 stations covering the entire country. S

tations were updated and added to and the system continued in use until the 1850s when electric telegraphy took over. A Chappe telegraph and the posible positions are shown on the left.
During the French wars the Allies were handicapped by poor communications while the French had this excellent system – provided visibility was good. The brothers invented a simple and robust system with two arms, each with a short upright at the end. This could be controlled by counterweights by one man. A message of 36 letters could reach Lille from Paris in about half an hour. Codes were also developed, so messages, including numbers, could be sent in plain, or code. in addition there was a 3-armed system  used from 1803 onwards at coastal locations to warn of invasion. The Emperor was so convinced of the benefits of the telegraph that he took portable versions with him on campaign.
The British government was quick to see that without a telegraph system they were at a distinct disadvantage. The Admiralty’s Shutter Telegraph was created in 1795 to a design by Lord John Murray and had six rotating shutters which were used to indicate a complicated code. It required a rectangular framework tower with six, five feet high, octagonal shutters on horizontal axes that flipped between horizontal and vertical positions to signal. One was set up on top of the Admiralty building in Whitehall – more or less where the modern telecommunications masts can be seen today doing much the same job.
With a staggering disregard for security it was possible to visit the telegraph station, provided one tipped the operator. Presumably only reputable persons were permitted to enter the Admiralty in the first place, but it is still hard to believe that this was not a security loophole. The newspapers kept an eye on telegraph

activity and could deduce when something major was about to happen by the volume of traffic and where it was going, even if they could not decipher it
The first line ran from the Admiralty to the dockyards at Sheerness and on to Deal. It had 15 stations along the route and a message took an astonishing sixty seconds. The second went south from London to the naval base at Portsmouth and then on to Plymouth and was opened in May 1806. The third to Yarmouth on the east coast opened in 1808. The image on the left shows the telegraph array on top of the church on St Albans, Hertfordshire. 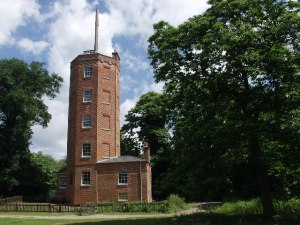 The intermediate stations were  wooden huts and with a staggering lack of foresight they were all abandoned in 1814 when peace was declared and had to be recommissioned hastily in March 1815 when the news of Bonaparte’s escape from Elba reached London.
When peace came the enterprising Chappe brothers promoted their system for commercial use and some of their stone towers can still be found – there is one in Saverne, for example, and one at Baccon on the Loire, just west of Orleans which I visited a few years ago. (Photo, left, shows it with its restored telegraph arms).
Later in 1815 the Admiralty secured funding for a new system using arms rather than shutters and used the system – weather permit

ting, until 1847. The brick tower on the right is the semaphore tower at Chatley Heath on the line to Portsmouth. It is now in the care of the National Trust.

Going to the Library In Georgian London

In a recent post I used two of Cruickshank’s delightful monthly views of London to illustrate the state of the streets. When I looked at March I found it showed the effects of March gales on pedestrians passing the doors of Tilt, Bookseller & Publisher, which made me dig further into my collection to see what I had on access to books.

For the middle and upper classes in Georgian London reading was a significant leisure pastime, whether the book was a collection of sermons, a political dissertation, a scientific work or a scandalous novel full of haunted castles, wicked barons and innocent young ladies in peril.
To have a library, however modest, was the mark of a gentleman, but not everyone could afford every book that they wanted, or wanted to own every book that they read.  The subscription circulating library came into existence to satisfy the reading habits of anyone who could afford a few pounds annual subscription and who required “Rational Entertainment In the Time of Rainy Weather, Long Evenings and Leisure Hours”, as the advertisement for James Creighton’s Circulating Library at no.14, Tavistock Street, Covent Garden put it in October 1808.

No doubt the elegant gentleman at the foot of this post would have satisfied his reading habit from one of these libraries. (He is sitting in his garden with a large bee skip in the background and is one of my favourite designs from my collection of bat-printed table wares. Bat printing refers to the method, by the way, and has nothing to do with flying mammals!)
The only bookshop and circulating library of the period that survives today is Hatchard’s in Piccadilly. It was established in 1797 and shared the street with Ridgeway’s and Stockdale’s libraries. The photograph of a modern book display in Hatchard’s was kindly sent to me by a reader who spotted my Walking Jane Austen’s London on the table.

(2nd from the right, 2nd row from the front).
Circulating libraries ranged in size from the modest collection of books in a stationer’s shop to large and very splendid collections.

At the top end of the scale was the “Temple of the Muses”, the establishment of Messrs. Lackington and Allen in Finsbury Square. The print shows the main room with the counter under the imposing galleried dome and is dated April 1809. The accompanying text, in Ackermann’s Repository, states that it has a stock of a million volumes. The “Temple” was both a book shop and a circulating library and the p 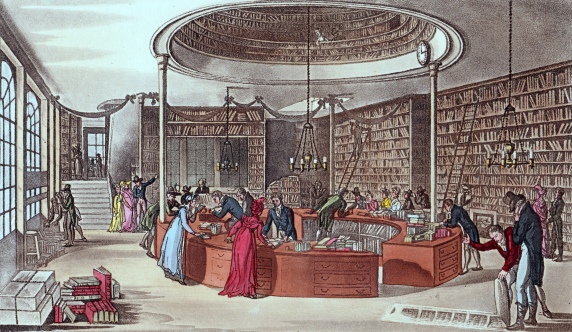 roprietors were also publishers and printers of their own editions. As well as the main room shown in the print there were also “two spacious and cheerful apartments looking towards Finsbury-square, which are elegantly fitted up with glass cases, inclosing books in superb bindings, as well as others of ancient printing, but of great variety and value. These lounging rooms, as they are termed, are intended merely for the accommodation of ladies and gentlemen, to whom the bustle of the ware-room may be an interruption.”

Circulating libraries advertised regularly in all the London newspapers and the advertisement here is a particularly detailed one from a new firm, Richard’s of 9, Cornhill and shows the subscription costs which varied between Town and Country. Special boxes were provided for the transport of books out of London, which was at the cost of the subscriber. Imagine the excitement of a lady living in some distant country house when the package arrived with one of the two books a month her subscription of 4 guineas had purchased!