Going to the Library In Georgian London

In a recent post I used two of Cruickshank’s delightful monthly views of London to illustrate the state of the streets. When I looked at March I found it showed the effects of March gales on pedestrians passing the doors of Tilt, Bookseller & Publisher, which made me dig further into my collection to see what I had on access to books.

For the middle and upper classes in Georgian London reading was a significant leisure pastime, whether the book was a collection of sermons, a political dissertation, a scientific work or a scandalous novel full of haunted castles, wicked barons and innocent young ladies in peril.
To have a library, however modest, was the mark of a gentleman, but not everyone could afford every book that they wanted, or wanted to own every book that they read.  The subscription circulating library came into existence to satisfy the reading habits of anyone who could afford a few pounds annual subscription and who required “Rational Entertainment In the Time of Rainy Weather, Long Evenings and Leisure Hours”, as the advertisement for James Creighton’s Circulating Library at no.14, Tavistock Street, Covent Garden put it in October 1808.

No doubt the elegant gentleman at the foot of this post would have satisfied his reading habit from one of these libraries. (He is sitting in his garden with a large bee skip in the background and is one of my favourite designs from my collection of bat-printed table wares. Bat printing refers to the method, by the way, and has nothing to do with flying mammals!)
The only bookshop and circulating library of the period that survives today is Hatchard’s in Piccadilly. It was established in 1797 and shared the street with Ridgeway’s and Stockdale’s libraries. The photograph of a modern book display in Hatchard’s was kindly sent to me by a reader who spotted my Walking Jane Austen’s London on the table.

(2nd from the right, 2nd row from the front).
Circulating libraries ranged in size from the modest collection of books in a stationer’s shop to large and very splendid collections.

At the top end of the scale was the “Temple of the Muses”, the establishment of Messrs. Lackington and Allen in Finsbury Square. The print shows the main room with the counter under the imposing galleried dome and is dated April 1809. The accompanying text, in Ackermann’s Repository, states that it has a stock of a million volumes. The “Temple” was both a book shop and a circulating library and the p

roprietors were also publishers and printers of their own editions. As well as the main room shown in the print there were also “two spacious and cheerful apartments looking towards Finsbury-square, which are elegantly fitted up with glass cases, inclosing books in superb bindings, as well as others of ancient printing, but of great variety and value. These lounging rooms, as they are termed, are intended merely for the accommodation of ladies and gentlemen, to whom the bustle of the ware-room may be an interruption.”

Circulating libraries advertised regularly in all the London newspapers and the advertisement here is a particularly detailed one from a new firm, Richard’s of 9, Cornhill and shows the subscription costs which varied between Town and Country. Special boxes were provided for the transport of books out of London, which was at the cost of the subscriber. Imagine the excitement of a lady living in some distant country house when the package arrived with one of the two books a month her subscription of 4 guineas had purchased! 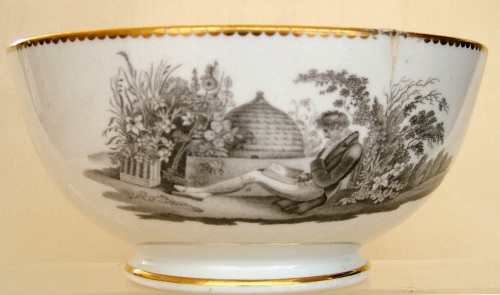 11 responses to “Going to the Library In Georgian London”