Is Christmas present money or a book token burning a hole in your pocket? Here are four of the non-fiction books I enjoyed most in 2014 and which I’d recommend to anyone interested in London’s history or the Georgian era. They aren’t all 2014 publications, but they were new to me last year.

Firstly, and probably my favouri 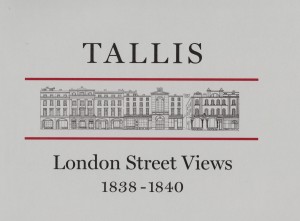 te – the London Topographical Society’s reprint of John Tallis’s London Street Views 1838-1840. It has an index, introductory essay and a searchable index on CDRom. The views are a little later than my usual period of interest, but Tallis caught London just before the major Victorian rebuilding and redevelopments got under way and these strips maps showing the elevations of the buildings along each side, plus the names of the businesses in each are incredibly detailed. I own four of the original maps, but it was a lucky chance that I found them at a price I could afford – they are expensive collector’s pieces – so this volume is a real treat.

The example above is a detail from one of my originals and shows part of St James’s Street. 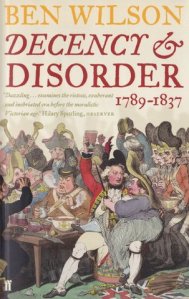 My next choice is Ben Wilson’s Decency & Disorder: 1789-1837, a scholarly, but very readable account of how the boisterous Georgians, valuing liberty and personal freedom above civil order and ‘decency’ and shunning the idea of a police force as foreign and oppressive, changed to adopt ‘Victorian values’ and an organized police force.

I particularly enjoyed the story of the Georgian gentleman who, such was his sensibility, was so overcome by the beauty of the scene that he was lost for words and could only cast himself, face-down, into a flowerbed in Bath. And then there was the member of the Society for the Suppression of Vice who forced himself to buy hand-carved sex toys at a prisoner of war market and then found himself at a loss to send them to the London headquarters. They were, he complained, too bulky to be enclosed in a letter.

Thirdly there is John Styles The Dress of the Common People: everyday fashion in eighteenth century England. Despite the title this lavishly illustrated and very scholarly work covers the Georgian era rather than the 18th century exactly. I found it in, of all places, the National Park bookstore in Salem, Massachusetts, but it is available in the UK.

It is a refreshing change from books of high-end fashion plates and includes information about fabrics and the cost of clothing, where people bought their clothing and a host of other details.

My final choice was too large to go on my scanner, so here is part of the cover of Royal River: power, pageantry and the Thames published for a major exhibition at the National Maritime Museum, Greenwich. (Guest curator, David Starkey).

The illustrations are gorgeous and the book ranges from topics as diverse as the lord Mayor’s Procession, Lord Nelson’s funeral procession, royal yachts and the transformation of the Thames in the Victorian era.

Best wishes for Christmas and the new year to all my readers!