A Blue Plaque for Georgette Heyer

An absolute favourite writer for most lovers of the Regency is Georgette Heyer, and the great news is that on Friday 5th June English Heritage unveiled a Blue Plaque at 103, Woodside, Wimbledon, where Georgette was born on 16th August 1902.
I’ve been a Heyer fan as long as I can remember, and I particularly get a thrill when I’m in the History stacks at the London Library in St James’s Square and recall that this was where she did so much of her research.
Heyer’s novels are a treat for anyone who loves Georgian London and my favourite is Frederica, with its priceless image of the dreadful dog Lufra chasing the cows in Green Park, even if it does contain one of Heyer’s few research failures when she located the Soho Foundry, not in Birmingham, but in…Soho.
For anyone who is inclined to dismiss her writing as romantic froth, I would recommend Jenny Haddon’s post http://jennyhaddon.com/?p=973 “The Space Between the Words” on the understated power of her writing. And if you haven’t already read it, Jennifer Kloester’s biography Georgette Heyer, is the perfect accompaniment to her books.
I’ll leave you with a picture of two books from my collection, including one of my precious first editions. And if you like to see a (good) feature film, made of one of her novels, why not sign the petition http://www.petitionbuzz.com/petitions/georgetteheyerfilm 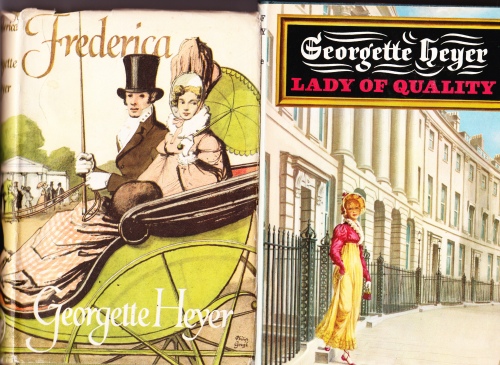 It’s June and the Pictures Are On the Wall 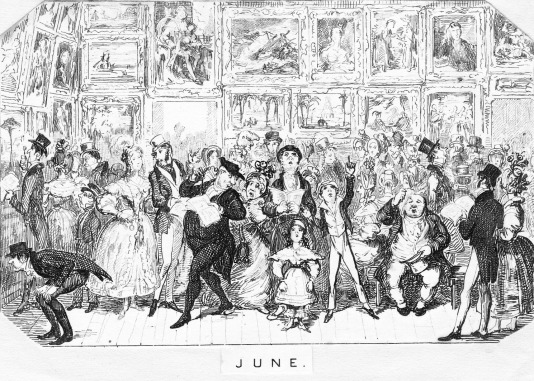 For the first of June here is another of Cruickshank’s delicious drawings of London life month by month. It shows the Royal Academy’s Summer Show with the gawping crowd of connoisseurs, fashionable types and sightseers, all jammed in to look at the pictures hung floor to ceiling in the fashion of the time. This was one of the major events in the London Season and has been held every year since 1769. 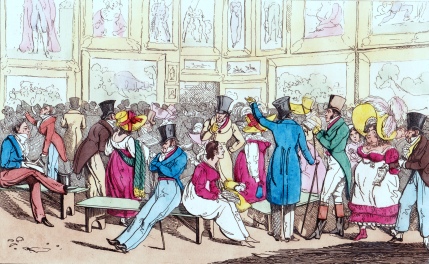 The Royal Academy was initially located in Pall Mall, then moved in 1771 to the first completed wing of New Somerset House, in the Strand. In 1837 it occupied the east wing of the recently completed National Gallery in Trafalgar Square and in 1868 it moved to its present location, Burlington House, Piccadilly. The plate below from Ackermann’s Repository for May 1810 shows the “Hall at the Royal Academy, Somerset House” with an artist sketching one of the plaster casts of Classical statues. 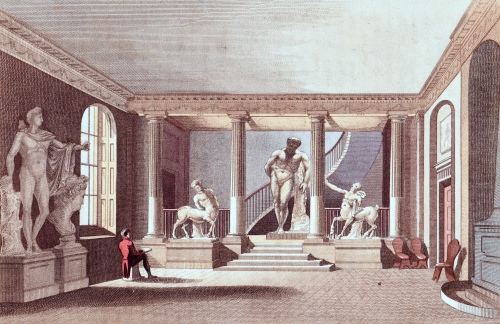