At this time of year, when we are all thinking about shedding as much clothing as possible in the heat, I think with even more sympathy about the layers of clothing that women were encumbered with in earlier years – and corsets, or stays as they were more usually known in the early 19th century in particular.

Stays could be made of leather, which was then not washed (a fairly dreadful thought!) or a substantial fabric, which at least could be laundered. Stays normally laced at the back but, before the invention of mass-produced metal eyelets, they could not be pulled as tight as Victorian stays were because the fabric would rip. Their shape and their constricting powers therefore depended on their stiffening of whalebone or thin cane. They pushed the breasts up rather than cupping them and were normally fitted with shoulder straps. 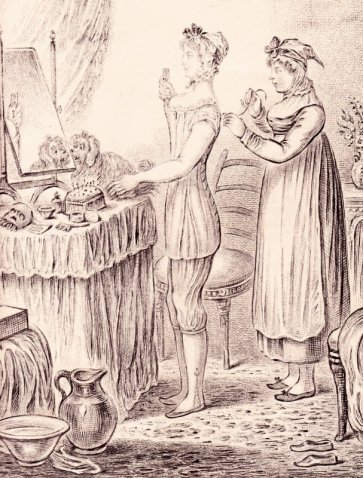 The print by Gillray is plate 1 from a series called The Progress of the Toilet, dated 1810 and shows a lady being laced into long stays. She is wearing fashionable clocked stockings and, rather daringly, drawers, caught in tight at the knee. Because they resembled masculine costume, drawers were considered very fast.

Jane Austen’s letters contain virtually nothing on the subject of underwear, but she did have very definite views on the subject of stays. In September 1813 she was able to pass on the latest intelligence from London on the subject  to her sister Cassandra. ‘I learnt from Mrs Tickar’s young Lady, to my high amusement, that the stays now are not made to force the Bosom up at all; that was a very unbecoming, unnatural fashion.’

Stays could be made to measure, but were also available off the peg and Mrs Clark, whose shop was at no.56, St James’s Street, advertised in 1807,  ‘…a large assortment of corsets of every size, and superior make, so that ladies may immediately suit themselves without the inconvenience of being measured.’

Ladies living out of town could order stays by mail order as this advertisement from the Morning Chronicle of November 1 1810 shows.

HER MAJESTY’S STAY-MAKER. – MRS. HARMAN No.18 New Bond-street, London, has the honour most respectfully to announce to those Ladies who attend to the elegance of the female figure, that she has now ready for their inspection a very large and fashionable assortment of her much-admired LONG and SHORT STAYS. The great number of Ladies of Rank and Fashion, who honour Mrs. Harman with wearing her Stays, is a most convincing proof of their pleasantness, utility, and superiority to every other Stay. Mrs. Harman’s Stays are finished with that novelty and taste which has procured for her the countenance of Royalty, and the patronage of the first Nobility. Ladies living in the country, by sending a letter (post paid), will have proper directions sent them to send their own measure, so as to insure their fitting.

Newspapers were not constrained by notions of modesty when commenting on ladies’ fashions and undergarments, or their appearance in them as this piece from The Times in 1799 on the flimsiness of fashionable gowns and the fashion for false bosoms shows:

“If the present fashion of nudity continues its career, the Milliners must give way to the carvers, and the most elegant fig-leaves will be all the mode. The fashion of false bosoms has at least this utility, that it compels our fashionable fair to wear something.”

And The Statesman on 2 September 1808 broke into verse to criticise modern fashions compared to those of the days of Queen Anne, managing to incorporate a furniture pun about chests and drawers in the process!

When panoplied in whalebone stays,

Such as were worn in Anna’s days,

Our fair kept Virtue in their breasts,

And lock’d her safely – in their chests.

But, since their chests are open’d, how,

And where, do they keep Virtue now?

Is she protected by their lawyers?

Or do they keep her – in their drawers?

Historical re-enactors have told me that they find their stays are supportive, and help prevent backache when they are working in kitchens, so perhaps there was something to be said for stays. What do you think?

A Royal Birth, A Duchess “in the straw” and Some Dynastic Speculation

As I write this post the newspapers are full of discussion about the Duchess of Cambridge’s pregnancy, the birth and any other royal or baby detail they can try and make remotely relevant. I had always assumed that the Georgian papers were slightly more restrained and respectful about royal births, even when the royals themselves were often cruelly lampooned. Imagine my surprise when reading a copy of Felix Farley’s Bristol Journal of December 28th 1816 to find this snippet on the front page:

Wednesday the Princes Augusta of Salms, daughter of the Duchess of Cumberland, arrived at Cumberland House from the continent. 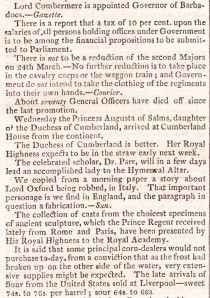 The information about the Duchess of Cumberland was in amongst a very mixed bag of news!

The Duchess of Cumberland is better. Her Royal Highness expects to be in the straw early next week.

“To be in the straw”, Grose’s Index to the Vulgar Tongue (1785) informs me is, “to be in childbed.” Is anyone else as amazed as I was to see a respectable newspaper using slang about such a subject? I would have thought they would say, the duchess “expects to be confined early next week.” Or has anyone come across the use of this phrase in a “respectable” context?

Princess Frederica of Mecklenberg-Strelitz was born in 1778, the niece of Queen Charlotte, wife of George III. She was therefore the first cousin of the numerous British royal offspring, including Prince George, later Prince Regent and King George IV.

Frederica’s married life was, to put it mildly, eventful. First, when she was only fifteen, she married Prince Louis, younger son of King Frederick William II of Prussia, but it was an unhappy match and he died in 1796 leaving her, at the age of eighteen, the mother of two children, Prince Frederick and Princess Frederica.

A year later she met and became unofficially engaged to Prince Adolphus, Duke of Cambridge, King George III’s seventh son. But to marry they needed the king’s permission and the queen, Frederica’s aunt, was adamantly opposed to the match and persuaded the king to refuse his consent.

The next year, Frederica became pregnant during an affair with Prince Frederick William of Solms-Braunfels who married her rapidly to prevent the scandal becoming any worse. It was another unhappy marriage, despite the birth of seven children, for Prince Frederick was dissipated and a heavy drinker. Three of the children lived to marriageable age and it was one of those, the Princess Augusta, who was mentioned (her title misspelt) in the Journal report.

Things were so bad between the couple that Frederica was advised to divorce, a remedy supported by the King of Prussia. It was at that point, in 1813, that she met Prince Ernest Augustus, Duke of Cumberland, and fifth son of King George III, who was visiting one of his German relatives. The couple fell in love and, very conveniently, Frederica’s husband died, creating rumours that she had poisoned him.

Frederica and Ernest married in Germany two years later and again at a second ceremony at Carlton House, the Prince Regent’s London home, on 29th August 1815. The king and Parliament gave their consent, but Queen Charlotte was still strongly opposed to the match, refused to attend the wedding and advised the couple to live on the continent as much as possible.

The pregnancy that the Journal comments on was the first of this marriage, but tragically the baby, a girl, was stillborn. After a further stillbirth a son, Prince George, was born to the couple in 1819.

Ladies gather to admire the new arrival. A charming image from a ladies’ memorandum book of 1806

At the time of the newspaper report the expected birth of a child to the king’s fifth son was not of any great significance in the eyes of the public. The heir, the Prince Regent, had a very popular and healthy daughter, Princess Charlotte, and the Duke of Cumberland had three other brothers between himself and the throne. But as it turned out the unfortunate Charlotte died in childbirth in 1817 and there was a rush for the royal dukes to marry and produce heirs. Prince Frederick, the second son, died childless. The third succeeded George IV as William IV, but he had no legitimate children and it was the daughter of the fourth son, Edward, Duke of Kent, who became Queen Victoria.

But the British kings were also Kings of Hanover and Hanover operated under Salic Law which meant that no woman could succeed to the throne. So on William IV’s death Ernest became King of Hanover and Frederica his queen and eventually their son George became George V of Hanover. If Victoria had not been born then the throne of Great Britain would have gone to  Ernest  and then to his son. We would have had King Ernest I and then George V, who lived to 1878 – a continuation of the Georgians and no Victorians!

To celebrate the publication of Walking Jane Austen’s London  I am over at the lovely Word Wenches’ blog in conversation with historical romance author Jo Beverley about the story behind the book. Why not drop in and leave a comment there – there is the prize of a copy of the book to one lucky commentator.