A Thundering Good Sermon – Going to Church With the Georgians 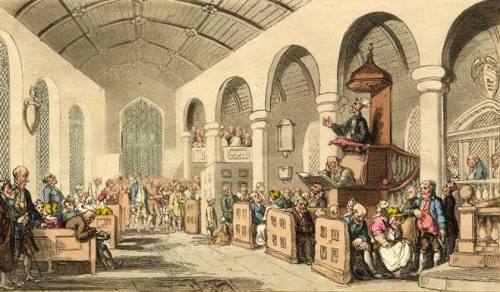 In this print by Rowlandson of Dr Syntax Preaching (1813) virtually all eyes in the crowded church are on the minister at the top of the three-decker pulpit. The owners of the most important house in the district are in their own pew to the extreme right, the high-sided pews and the gallery are packed . Everyone else must stand. The altar is out of the picture – literally.

To simplify drastically, by the mid-eighteenth century worship in the Church of England was turning from both ritual and unquestioning belief in what your vicar told you or from the belief in predestination – that some were saved and some were not and that there was not a great deal to be done about it. What mattered by the early 18th century was the decision of the individual to turn to God and to live their lives accordingly – and to do that they needed to hear and understand the Word of God. Sermons became the focus of worship – the minister would expound on a text from the Bible, sometimes for hours. An increasingly literate population was offered texts to study and books of sermons became popular reading. Preachers such as John Wesley and others attracted huge congregations. On Kennington Common in 1739 the radical Anglican clergyman, and Methodist pioneer, George Whitefield, preached nightly in the open air to crowds of between 30-50,000 in the open air. Later that year, fellow Methodists John and Charles Wesley also preached regularly on the Common and attracted similar crowds. The emphasis on preaching became dominant in the parish churches across England. The image below is old Fylingdales church looking west,showing the triple-decker pulpit and the box pews, which are numbered. 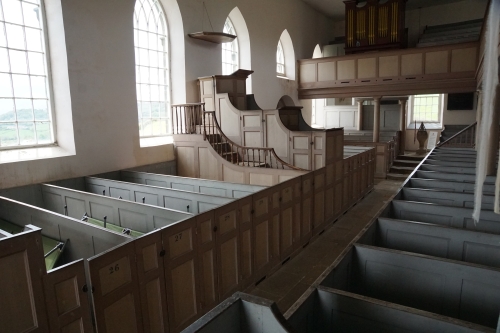 Taking communion became something that the congregation would do only a few times a year (five was quite normal)  and therefore the altar moved from being the focus of the church interior, supplanted by the pulpit. In some cases pews were built that faced the pulpit even if that meant their occupants would have their backs to the altar. The pulpit dominated, often a three-decker with a desk at the bottom for the vicar’s clerk, then a desk above that for the vicar to sit at and above that the pulpit where he would climb to deliver the sermon. 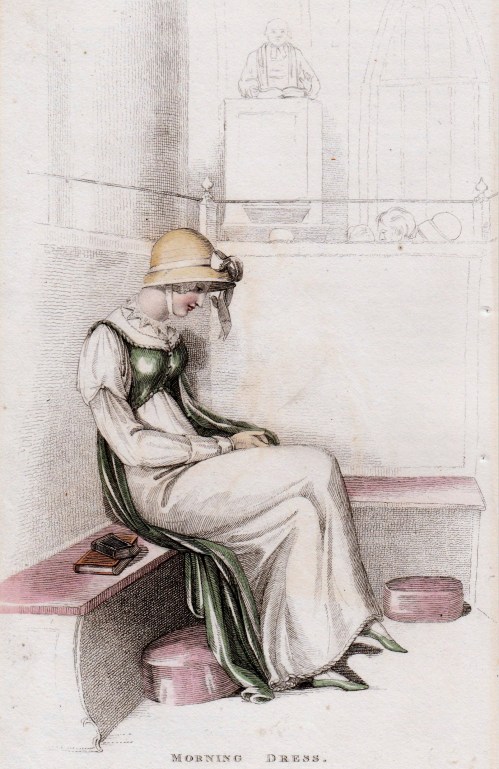 The Rowlandson print shows pews with relatively low sides, but many were introduced with sides so high that only the vicar from his raised position could see into them – these were called box pews, enclosed spaces where the churchgoer could focus entirely on what was being said without distraction from others in the congregation. The print of October 1810 in Ackermann’s Repository [above] shows an attentive listener in her box pew. Hearing what was said was crucial and, as a charming reminder of that, the ear trumpets used by an early 19th century vicar’s wife can still be seen hanging on the back of the pulpit in Whitby church. [Below] 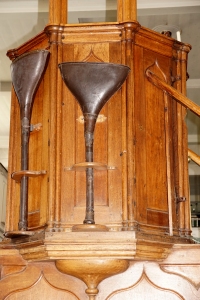 Pews were generally rented out so that the same families would occupy them for each service and, for the more prosperous, they soon acquired extra fittings and more comfort. They might be baize-lined, have wider seats with cushions and carpets on the floor. In winter little portable charcoal foot warmers would be introduced. Aristocratic families might well have extremely ornate pews built, separated from the rest of the church in a gallery, a continuation of much earlier practice. For large households the servants might have their own box pew at the back of the church or would occupy part of the gallery. Those unable to afford pew rents would have to stand or take advantage of free pews, often provided by charitable donations.

In Whitby church there is a pew marked ‘For Strangers Only’, to accommodate visitors to the town. At a time when not to attend a place of worship regularly might mark you out as a dangerous radical or freethinker, churches were crowded places on Sundays. 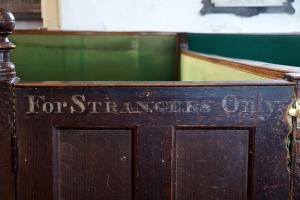 The board in the 1821 Fylingdales church commemorates the number of ‘free’ pews that had been provided in the newly rebuilt church. 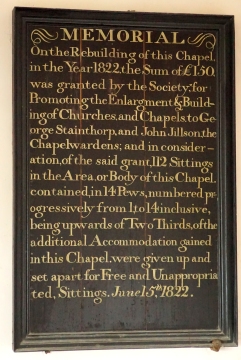 But patterns of worship change and by the 1830s there was a move back towards what might be called ‘High Church’. Ritual, communion, vestments, a revival of Gothic styles of architecture and the influence of the Anglo-Catholic Oxford Movement led to another change in church interiors. Box pews were ripped out wholesale, the altar was given renewed prominence and the pulpits were replaced or the old ones cut down in height with the two desk levels removed. Some Georgian interiors suffered more than others. In Coxwold church in Yorkshire the then vicar, Laurence Sterne (author of Tristram Shandy) installed high box pews in the 1760s. In 1906 they were cut down in height by 18 inches. His triple-decker pulpit was reduced in height to a single-decker in the 19th century. Many churches were entirely stripped of their Georgian fittings and ‘restored’ to a Victorian conception of what a medieval church ought to have been. Poet and architectural crusader John Betjeman derided these efforts in his “hymn” The Church’s Restoration.

Has left for contemplation

Not what there used to be…

Some churches were spared ‘restoration’, usually by lucky accident or poverty. The old church of St Stephen, perched high above the village of Flyingdales, North Yorkshire, was built in 1821 to replace a medieval church that had fallen into decay. Its interior is therefore complete in the Georgian style with box pews, the three-decker pulpit and seats on the eastern side turned so their occupants faced the preacher, not the altar.

In 1870 the new vicar, apparently despairing of converting the old building (and, reading between the lines, many of the parishioners) to the new ways of worship, had a new church built down in the heart of the village. This was not universally popular and a splinter group kept trying to use the old church for services until the vicar had it locked up except when it was used as a mortuary chapel serving its old graveyard. It is now in the care of the Redundant Churches Fund. 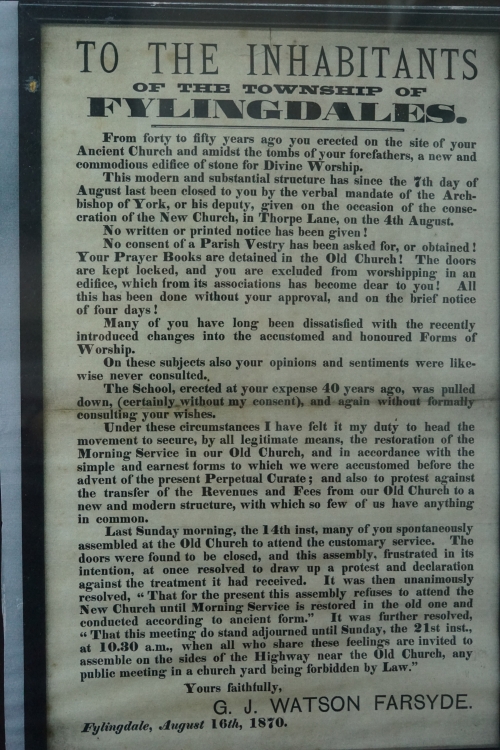