The Road to Waterloo Week Nine – Mrs Wilmot Flops at Drury Lane, l’Orient Blows Up at Sadler’s Wells & Paris is Flooded By Arms

All the London newspapers began the week by printing long, stolidly indigestible, extracts from the Paris press along with editorial pieces sneering at Napoleon’s attempts at establishing a constitution and reports of arms and ammunition flooding into Paris for the army.
The Times reported that the Duke of Wellington was expected to make his headquarters at Brussels and that he commanded troops in a line from Ostend to Charleroi, but that opinion was very divided on the continent about whether war would – or should – break out. The Duke (shown in a portrait by Thomas Phillips) was reported to be in favour of it. 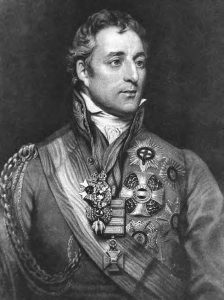 “Drury Lane Theatre – on Saturday night a most crowded and brilliant assembly were attracted to the representation of a new tragedy by Mrs. Wilmot, a Lady of Fashion, which had been got up with great splendour of decoration and in favour of which there was the most sanguine anticipation. It is a story of the Saxon era of our nation…There were abundant materials for dramatic interest and effect… The plot was pregnant with those high sentiments of honour and gallantry which distinguished our Saxon ancestors… The materials were, in short, ample for the production of a play of great interest but the Lady has rather produced a dramatic poem than a regular drama.” By the third act, despite Mr Kean in the leading role, the audience was getting restless and “the whole of the fifth act passed with the incessant impatience and condemnation.” The unfortunate Mrs Wilmot presumably retired discomforted and the piece was never heard again. The print below shows the fashionable crowd outside the boxes at Drury Lane – and the dashing young ladies hoping to attract one of the dandies on the strut there.

Rather more successful productions were attracting audiences elsewhere. Astley’s Royal Amphitheatre was featuring a “new serio-comic equestrian pantomime called the Life, Death & Restoration of the High-Mettled Racer; or Harlequin on Horseback. In the course of 21 interesting scenes will be introduced a Real Horse Race and a Real Fox Chase.”
Sadler’s Wells, which had been showing a recreation of the Battle of the Nile “on real Water” had now, presumably reflecting the popular mood, added more ships and the “blowing up of l’Orient” along with an illuminated transparency of Nelson.
On Saturday 29th Generals Ponsonby and Bing, along with their horses, embarked at Ramsgate on the “Duke of Wellington” for Ostend. Colonel Smith’s F Troop of Artillery had also arrived at Ramsgate and were expected to embark on the next tide.
On which note, with the artillery bound for the continent, I will mention the trilogy of Waterloo novels – Brides of Waterloo – which I have written with two fellow authors. They are available for pre-order now. The first, A Lady For Lord Randall, by Sarah Mallory, will come out in May. A Mistress for Major Bartlett, by Annie Burrows, is due in June and my book, A Rose for Major Flint, comes out in July. The novels are linked by their heroes – all artillery officers – and the timeframe runs from several weeks before the battle until several weeks afterwards.