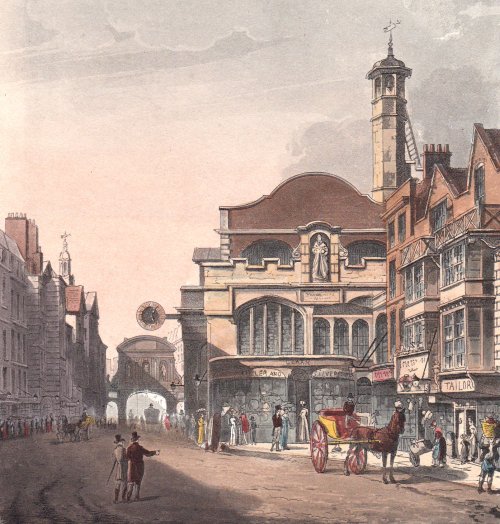 The scene above (from Ackermann’s Repository ) 1812 shows the view west along Fleet Street towards Temple Bar, the point where the City of London becomes Westminster. The Regency Londoner  would have trouble recognizing it today – always assuming they could stand in the same spot without being mown down by the traffic. Temple Bar, after many adventures is now re-erected next to St Paul’s Cathedral and the church whose west end faces us – St Dunstan’s in the West – was demolished and rebuilt in 1830 when Fleet Street was widened by nine metres.

I found a mid-eighteenth century print of St Dunstan’s in a folder I bought at auction a few weeks ago and that image prompted me to look at the one above again. I have to confess an interest in St Dunstan’s – two of my ancestors were in London in 1643, died of the plague and were buried there. 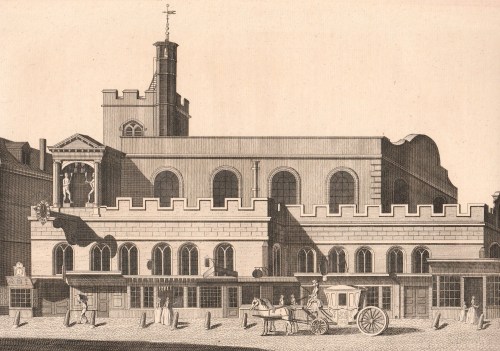 I love the street scenes these prints show, especially the shops. In the 18th century one you can clearly see the way shops have been built right around the walls of the church itself as was common at the time. Each has its hanging sign and the shop on the far left must be a clockmaker’s. By the time of the 1812 print the shops along the side have been swept away, but the ones of the east end remain.

St Dunstan’s was built in the 12th century, grew and was changed and even survived the Great Fire of 1666 which reached almost to its walls. Samuel Pepys, whose groping is one of his most unattractive features, tried it on with a servant girl while listening to a sermon in St Dunstan’s. She took out a packet of pins in a threatening manner and he took the hint!

Inside there are monuments rescued from the old church and the ring of bells is the original. The only survival of the old church on the outside is the clock projecting from a temple containing the figures of two men with clubs who used to hit a bell every fifteen minutes. It was erected in 1671 by the parishioners as a thank-offering for the escape from the Fire. The clock and the figures are set back a little now, so it is difficult to see them unless you are square in front of them, but they show up well on Streetview. The clock which according to the London Encyclopedia, was the first in London to have minutes marked and to be double sided, was a tourist attraction mentioned by Dickens in Barnaby Rudge and Sir Walter Scott in The Fortunes of Nigel.

When the church was demolished it was removed to the Marquess of Hertford’s Regent Park villa, but it was returned in 1935, thanks to Lord Rothermere the newspaper proprietor who brought it back to the heart of London’s newspaper world, Fleet Street.

One response to “A Fleet Street Church”