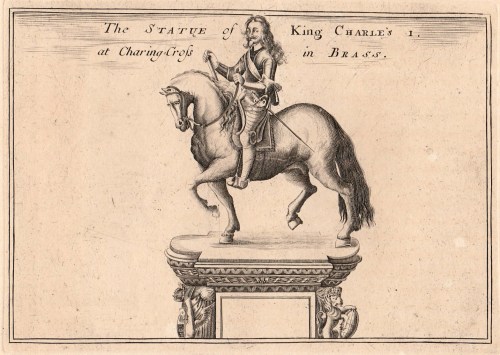 Standing on the southern edge of Trafalgar Square, facing down Whitehall, and in the midst of a permanent traffic jam, stands the bronze statue of Charles I, looking down towards the place of his execution as he has done since 1675. The surroundings have changed beyond recognition, but every Georgian Londoner and visitor would have been familiar with the statue which appears in numerous prints.

The statue was created by Hubert le Suer in 1633, but it was not erected immediately and by the time of the Civil War it had become a target for the Parliamentarians. It was sold to John Rivett, a brazier, in 1649 on the strict instructions that it was to be melted down. Rivett, obviously both a shrewd political forecaster and a businessman, buried it in his garden and made a great deal of money from small souvenirs allegedly made from the bronze. Charles II acquired it on his restoration and it was erected, more or less on the site of the medieval Charing Cross, in 1675. It can be seen on the map, just below the R of Cross. Behind it is the King’s Mews and the Golden Cross Inn, now occupied by Trafalgar Square. The bulk of Northumberland House is to the east, below the final S of Cross. 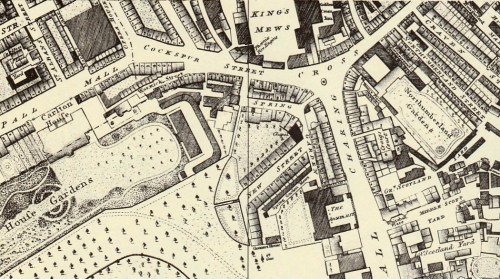 The pedestal is said to have been designed by Wren and carved by Grinling Gibbons.

This print of 1811 from Ackermann’s Repository, shows the view east past Northumberland House and down the Strand.

The statue was obviously a familiar landmark that enabled artists to locate their images. The 1823 print of ‘The notorious Black Billy “At Home” to a London Street Party’ (drawn by Samuel Alken, published by Thos. Kelly) shows it surrounded by lively street life. Despite being shown as white, “Black Billy” Waters (c. 1778–1823) was black and is said to have been a slave who escaped by joining the British navy and who lost a leg in a fall from the rigging. Whatever the truth, he was a popular street entertainer with his characteristic feathered hat and violin.

By the middle of the 19th century street life was rather more decorous and this undated Victorian engraving shows a pristine Nelson’s Column, Trafalgar Square and the National Gallery (with columns recycled from Carlton House). 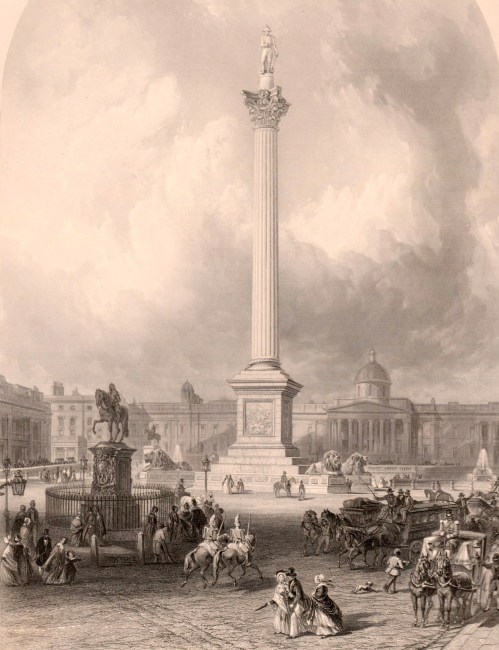 Today the traffic around the statue is unrelenting, and so often jammed solid, that bus and taxi passengers have ample opportunity to study Charles in all his melancholy glory!