Cold Bath Prison – the Gaol That Gave the Devil Ideas

This bleak place is Cold Bath Prison, or the House of Correction, Cold Bath Fields, a place so notorious for its harshness that the poets Southey and Coleridge wrote of it in their Devil’s Thoughts (original edition 1799):

As he went through Coldbath Fields he saw

And the Devil was pleased, for it gave him a hint

For improving his prisons in Hell.

The Cold Bath was a county prison supervised by magistrates and used for male, female and juvenile offenders serving relatively short terms. It was also known as the Steel, perhaps as a reference to its tough regime.

The prison was opened in 1798, closed in 1877 and demolished in 1889. The Post Office sorting office, somewhat ironically  named Mount Pleasant, was built on the site. It can be clearly seen in the top left hand section of Horwood’s map of London below. 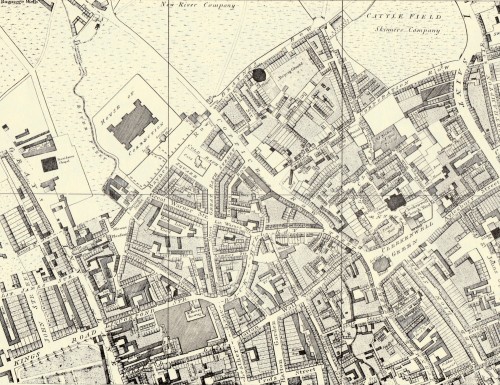 The road to the NE of the site is now Farringdon Road, Baynes Row to the SE is now Mount Pleasant and Phoenix Place covers the Fleet River on the Western edge.

Right at the top edge of the map you can see ‘Bagnigge Wells’ and ‘New River Company’. This area was part of a complex of springs, pools and reservoirs that stretched between Clerkenwell and Islington and included amongst several others, the Peerless Pool, Sadler’s Wells, Islington Spa, the London Spaw, Merlin’s Cave and Coldbath spring. The Cold Bath building can be seen in Cold Bath Square immediately to the SE of the prison.

“The edifice, which is of brick, stands within a large area, encompassed by a strong buttressed wall of moderate height. The gate is of Portland stone, contrived in a massy style, and sculptured with fetters, the hateful but necessary appendages of guilt.”

The cartoon (1799) shows ‘Citizens Visiting the Bastille’ although The House of Correction for the County of Middlesex is clear over the gateway, as are the bunches of fetters on either side.

The notes to the 1814 print state that the prison “is built on the plan proposed by the late Mr Howard, and may be considered, both in construction and discipline, as a real experiment of his severe principles on convicted felons and hardened offenders.”

Mr Howard was John Howard (after whom today’s Howard League for Penal Reform is named). To quote http://www.parliament.uk: “In 1774 his evidence to a House of Commons committee led to two Acts which aimed to improve conditions in gaols. His published writings on the subject were widely read and his detailed accounts of inhumane conditions caused dismay. He advocated a system of state-controlled prisons in which the regime was tough, but the environment healthy. In 1779 the Penitentiary Act authorised the construction of two prisons in accordance with his own theories. He advocated a regime of solitary confinement, hard labour and religious instruction. The objective of imprisonment, he believed, was reform and rehabilitation, not just punishment.”

Prisoners undertook hard labour in prison, much of which was pointless and brutal – a punishment rather than an attempt to reform them by teaching useful skills. One of the most dreaded was the treadmill, known as the ‘cockchafer’, where inmates climbed the equivalent of 8,640 feet for six hours every day, quite uselessly as the great wheels turned no engines or equipment. The print below shows the Cold Bath treadmill in about the middle of the 19th century.

One of the labours that did have a useful end product was working the crank that either drew water or ground corn. The print below from Ackermann’s Microcosm of London shows “two of the convicts at hard labour, in which they are employed for an hour at a time. The view is taken from the Water-Engine Court…the turn-key [is] bringing two fresh men to relieve those who have completed their task…” 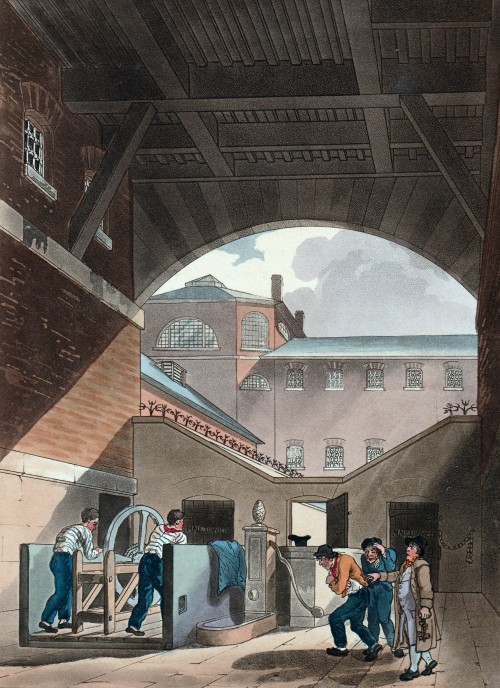 The prison also followed Howard’s principles of putting people to useful work, some of which may have given them skills that helped them on release. “The prisoners are severally employed in  useful labour: the men in  picking oakum, knotting yarn, making spun yarn and rope, making and repairing the prisoners’ clothes, whitewashing and painting the prison, attending the county carpenter, bricklayer, mason and plumber as labourers, and others as gardeners, or carpenters in making wheelbarrows and other utensils for the garden; the women in spinning thread, making, repairing and washing of the bedding, linen and clothes of the prisoners, picking oakum etc.”

The diet included  no vegetables or fruit at all and very little protein either. “The county allowance to the convicts is a pint of gruel and a pound of bread each day for breakfast, and a quart of broth of rice and oatmeal, and six ounces of meat, alternately, for dinner. All sick persons have wine or whatever indulgence the medical attendant may order.” It seems incredible that the authorities could boast that, “It is a strong proof of the healthiness of the prison, that from November 1793 [presumably when in the old prison] to November 1807, out of 19,862 male and female prisoners, only ninety-one have died.”

Over the same period twenty four babies were born to add to the dependent children who entered the prison with their parents. These children were separated from their parents – as they would have been in workhouses – “and are taught to read, say their catechism, etc” Possibly the “etc” included sewing for the girls and basic craft skills for the boys. Writing and arithmetic are not mentioned.

I can imagine that anyone released from Cold Bath Prison was strongly motivated never to return, but given the levels of poverty and the severity of sentencing for even the most trivial property crime, it seems likely that many came back.