Walking the Dog in Georgian London 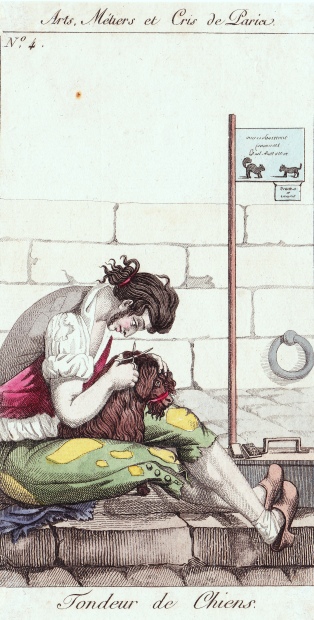 It was this delightful French print of a dog groomer that started me wondering about Georgian Londoners and their pet dogs and looking through my print collection to see what I could find. The Tondeur des Chiens – or dog shearer – is from a set of about sixty prints by Adrien Joly (1772-1839) entitled Arts, Métiers et Cris de Paris par Joly d’après nature. They were published in c.1813.  The groomer has his little box of tools with an attached advertising sign and wears clogs. Wisely he had tied up the muzzle of the shaggy hound who looks seriously displeased with the process.

I decided not to look for working dogs – hounds, ratting terriers and so forth, but for animals that seemed to be pets.  This lady, wearing Winter Carriage Dress (La Belle Assemblee 1818) is accompanied on a rather 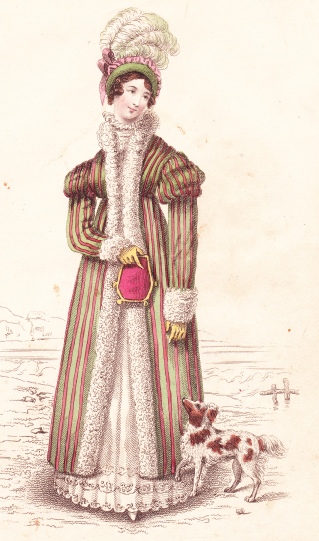 muddy foreshore by what I think is a miniature spaniel (or is it?).

appears to be a poodle wearing some sort of band on its front leg. Ornament or identification, I wonder?

Street scenes I can find with dogs in do not show them on leads and in some cases they are running about looking quite out of control.

The scene below is a detail of a print of Horse Guards Parade. The gentleman on the right has his dog – some sort of collie, possibly, under control, but in the centre a greyhound is chasing a smaller dog with a curly tail – right under the hooves of the advancing troopers.  there also seem to be several dogs between the marching troops on the extreme left.

I have several of D T Egerton’s wonderful ‘Bores’ series of prints, published by Thomas McLean in 1824. in all of them the hero is subjected to some ‘boring’ occurrence – in this case, being shot in a duel!  I am not certain whether the brown and white spaniel is with the nervous gentleman on the left or the cool one on the right.

The detail below right is from the same series and shows the elegant officer being ‘bored’ by some unfashionable young man who is claiming acquaintance. The scene is outside the Clarendon Hotel in Bond Street and the officer is followed by his elegantly-clipped poodle.

And finally my favourite of the ‘Bores’ – how boring it is when the landlady discovers that you are not married to your pretty companion and throws you out on the pavement with all your possessions – including her parrot in a cage, pot plants and two little dogs. One looks like a miniature greyhound, the other is rather pug-like. 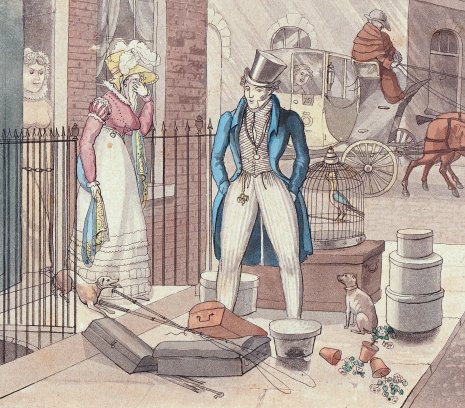 One of the emptiest, yet most evocative, spaces in London is Horse Guards Parade. In my last post I wrote about the Regent’s Bomb – the fantastical mortar and gun carriage that sits on one side of the Arch. This time I’m writing about a little of the history of the parade ground and another cannon with a wonderful gun carriage.

Horse Guards Parade sits between Whitehall and St James’s Park and began life as open land next to the grounds of York Place, the London palace of the Archbishops of York. Its main entrance faced down the road that is now Horse Guards Avenue, the bishop’s route to his landing stage on the river. With the fall of Cardinal Wolsey Henry VIII seized York Place and then set about acquiring “…all the medowes about saynt James, and all the whole house of S.James and ther made a fayre manision and a parke…” according to Edward Hall.
When the king began his work on what was to become Whitehall Palace a willow marsh for the farming of osiers for basketwork, Steynour’s Croft, covered much of what is now Horse Guards, the Bell Inn stood at the southern edge and an old track crossed it from the scrubland that became St James’s Park.
By 1534 the Palace of Whitehall was largely complete. Part of the area, a longitudinal strip running west across Horse Guards became his tiltyard, scene of tournaments and knightly exercises. Under Elizabeth I the Tiltyard was used for animal baiting and tournaments and pageants which were set pieces for state occasions. Under James I elaborate masques were held – including one involving an elephant carrying a castle – but the increasingly theatrical nature of royal masques led to the building of the Banqueting House on the other side of what was then King Street (now Whitehall) and the last masque in the tiltyard was planned for 1624. After that it became known as the Bearstake Gallery and it continued to be used for baiting sports until 1660.
A standing guard was stationed in a specially built guardroom at the tiltyard from 1641 and the area continued to house soldiers throughout the Commonwealth period.
On May 8th 1660 Charles II was proclaimed on the site of the old Tiltyard ‘Green’ and the renovation of Whitehall Palace began. A plan of c1670 shows Whitehall as a wide street coming down from the north and ending at the pinch-point of a Tudor gate. The range of buildings that were the old Horse Guards were built in 1663 with a yard in front and behind the range the open expanse of ground that became Horse Guards Parade.
In January 1698 a great fire destroyed the Palace of Whitehall, sparing only the Banqueting Hall and Old Horse Guards. A letter of the time records, “All parts from near the house my Lord Lichfield lived in to the Horse Guards were yesterday covered with heaps of goods rescued from the flames.”
The king moved to St James’s Palace, across the park, and Whitehall became the location for many government offices and from the 1730s the buildings surrounding Horse Guards were gradually replaced. The dilapidated old building was demolished in 1750 and the new building – the one we see now – was designed by William Kent, with additions by Isaac Ware.

The large open space was referred to as the Parade ground, but the first written reference to “Horse Guards Parade” as a title comes as late as 1817. By then the area looked much as it does today as can be seen in this print of 1809 by Rowlandson and Pugin, published by Ackermann. Only the high brick wall that closes off the gardens at the rear of Downing Street today (to the right of the picture) is missing.
The space is uncluttered now – when it is not being used for events such as Trooping the Colour and the Olympic Beach Volleyball, or in the Victorian era, the marshalling point for the vast funeral procession of the Duke of Wellington. However there are two interesting weapons exhibited there, either side of the arch. On one side is the Regent’s Bomb, on the other a 16th century Turkish cannon brought to the site in 1802 after its

capture in the siege of Alexandria (1801) when the British invaded Egypt to fight Napoleon’s army, an event that formed the setting for my recent novel Beguiled By 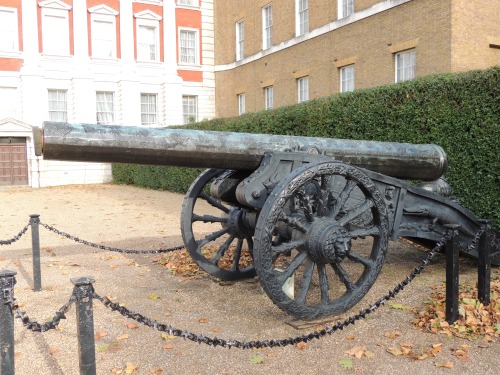 Horse Guards’ Parade lies between St James’ Park and Whitehall and has many historical connections – it was Henry VIII’s tiltyard for the Palace of Whitehall, it was the only open place in London big enough for the funeral procession of the Duke of Wellington  to form up in, it is the location for today’s Trooping the Colour ceremony – and it was even the location for the beach volleyball in the 2012 Olympics.

It is also the home of possibly the most eccentric piece of ordnance in the British Isles – the Prince Regent’s Bomb. It is a mortar, a squat black cannon captured from the French during the battle of Salamanca in 1812. The battle resulted in the lifting of the siege of Cadiz and the mortar was presented to the Prince Regent “as a token of respect and gratitude by the Spanish nation.” 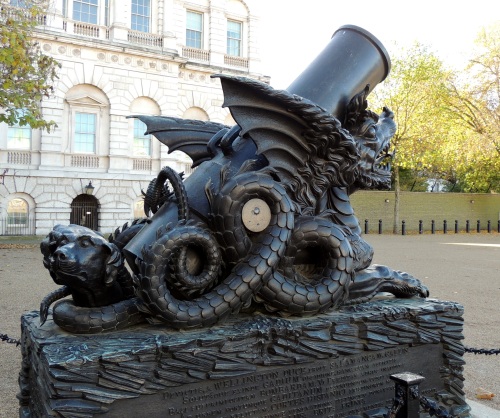 The plain and simple mortar was sent to Woolwich Arsenal and there a support and plinth was made for it in the shape of a dragon. It is a truly stupendous and bizarre construction and was unveiled, with great ceremony, on the 12th August 1816, the Prince’s birthday. Immediately it attracted  ridicule, for not only was the design completely over the top, as only something designed to appeal to the Prince of Wales’s taste could be, but “Bomb” sounded irresistibly like “Bum” and the Regent’s substantial backside was already the subject of many coarse caricatures.

Perhaps the cruelest is a companion to the verses below. I have not been able to locate a copyright-free image, but you can find it here in the British Museum’s collection  http://tinyurl.com/p6fxayy

The verses come from a broadsheet published by William Hone in 1816. I have filled in names that have been left blank in square brackets [ ]. The three ‘secret hags’ are the Regent’s three mistresses. ‘Old Bags’ was the Lord Chancellor, Lord Eldon (More about him in my post of April 21 2014: The Eloping Lord Chancellor). Vansittart was Nicholas Vansittart, Chancellor of the Exchequer, Tory Wellesley was Wellesley-Pole, elder brother of the Duke of Wellington, Castlereagh was Foreign Secretary and leader of the House of Commons and George Rose was Treasurer of the Navy. (My thanks to fellow historical novelist Melinda Hammond for help filling in the blanks (http://www.melinda-hammond.co.uk)

ON THE REGENT’S BOMB
Being uncovered, in St. James’s Park, on Monday, the 12th of August, 1816, His Royal Highness’s Birth-Day.

Oh! all ye Muses, hither come—
And celebrate the Regent’s bomb!
Illustrious Bomb! Immortal capture!
Thou fill’st my every sense with rapture!
Oh, such a Bomb! so full of fire—
Apollo—hither bring thy lyre—
And all ye powers of music come,
And aid me sing this mighty Bomb!

And first, with reverence this I note—
This Bomb was once a Sans culotte—
And next, by changes immaterial,
Became, at length, a Bomb Imperial!
And first exploded—pardon ladies!—
With loud report, at siege of Cadiz—
At which this Bomb—so huge and hearty,
Belonged to little Buonaparté;
But now, by strange metamorphosis,
(A kind of Bomb metempsychosis)
Has—though it odd may seem—become
Our gracious R[egen]t’s royal Bomb;
Who, after due consideration,
Resolved, to gratify the Nation—
Nor let his natal day pass over
Without some feat—to then uncover,
And there display—to strike us dumb—
His vast—unfathomable Bomb!

Oh, what a Bomb! Oh, Heaven defend us!
The thought of Bombs is quite tremendous!
What crowds will come from every shore
To gaze on its amazing bore!
What swarms of Statesmen, warm and loyal,
To worship Bomb so truly royal!
And first approach three ‘secret hags,’
Then him the R[egen]t calls ‘Old Bags;’
Methinks I see V[ansittar]t come,
And humbly kiss the royal Bomb!
While T[or]y W[ellesle]y, (loyal soul)
Will take its measure with a Pole;
And C[astlereag]h will low beseech
To kiss a corner of the breech;
And next will come of G[eorg]y R[os]e,
And in the touch-hole shove his nose!

For roundness, smoothness, breech, and bore,
Such Bomb was never seen before!
Then, Britain! be not this forgotten,
That, when we all are dead and rotten,
And every other trace is gone
Of all thy matchless glory won,
This mighty Bomb shall grace thy fame
And boast thy glorious Regent’s name!
In every age such pilgrims may go
As far t’outrival fam’d St. Jago!
And, centuries hence, the folks shall come,
And contemplate–the Regent’s Bomb!

“Bombastes” might have been surprised to discover that two hundred years later folks still come “and contemplate the Regent’s Bomb!” You’ll find the Prince’s Bomb on Walk 6 in my Walking Jane Austen’s London.