Walking the Dog in Georgian London

It was this delightful French print of a dog groomer that started me wondering about Georgian Londoners and their pet dogs and looking through my print collection to see what I could find. The Tondeur des Chiens – or dog shearer – is from a set of about sixty prints by Adrien Joly (1772-1839) entitled Arts, Métiers et Cris de Paris par Joly d’après nature. They were published in c.1813.  The groomer has his little box of tools with an attached advertising sign and wears clogs. Wisely he had tied up the muzzle of the shaggy hound who looks seriously displeased with the process.

I decided not to look for working dogs – hounds, ratting terriers and so forth, but for animals that seemed to be pets.  This lady, wearing Winter Carriage Dress (La Belle Assemblee 1818) is accompanied on a rather

muddy foreshore by what I think is a miniature spaniel (or is it?).

appears to be a poodle wearing some sort of band on its front leg. Ornament or identification, I wonder?

Street scenes I can find with dogs in do not show them on leads and in some cases they are running about looking quite out of control.

The scene below is a detail of a print of Horse Guards Parade. The gentleman on the right has his dog – some sort of collie, possibly, under control, but in the centre a greyhound is chasing a smaller dog with a curly tail – right under the hooves of the advancing troopers.  there also seem to be several dogs between the marching troops on the extreme left. 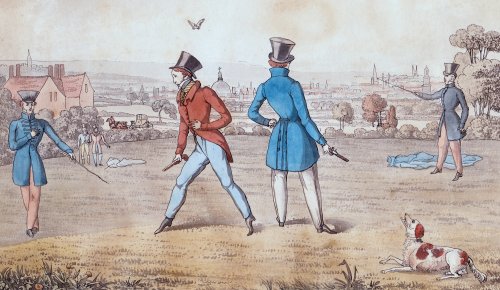 I have several of D T Egerton’s wonderful ‘Bores’ series of prints, published by Thomas McLean in 1824. in all of them the hero is subjected to some ‘boring’ occurrence – in this case, being shot in a duel!  I am not certain whether the brown and white spaniel is with the nervous gentleman on the left or the cool one on the right.

The detail below right is from the same series and shows the elegant officer being ‘bored’ by some unfashionable young man who is claiming acquaintance. The scene is outside the Clarendon Hotel in Bond Street and the officer is followed by his elegantly-clipped poodle.

And finally my favourite of the ‘Bores’ – how boring it is when the landlady discovers that you are not married to your pretty companion and throws you out on the pavement with all your possessions – including her parrot in a cage, pot plants and two little dogs. One looks like a miniature greyhound, the other is rather pug-like.

12 responses to “Walking the Dog in Georgian London”