Georgian domestic architecture still impresses us today with its elegant formality, symmetry and fine detailing. Even modest terraces of Georgian houses command good prices and once inside we expect to find high ceilings and a regular ‘rational’ floor plan.

Here is the Square in the centre of the Shropshire town of Shrewsbury – all apparently Georgian with the exception of the medieval market hall just visible on the right and the modern clock tower looming over the rooftops.

But very often all is not as it seems when we view one of these handsome frontages and that was brought home to me when I saw this house, also in Shrewsbury. 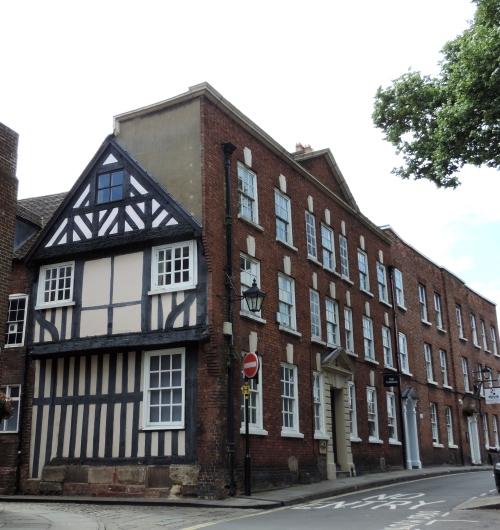 The imposing frontage on the corner of Belmont and Belmont Bank dates from 1750, but it has been slapped onto the front of a half-timbered house that is at least a century older. The old house has had new sash windows inserted and the weight of a new front top floor is being carried on the roof beams of the old house. From the front it looks completely Georgian, although the strange brickwork on the side to disguise the jetties of the timber-framed house seems rather odd. But the game is given away the moment one sees it from the side, and as most of the traffic approaching it must have come from that direction it seems a strange economy not to replace both faces. Possibly this would have been structurally impossible, given the way the timber-framed house was constructed – the side face could not be cut back and the frontage was already right onto the pavement, so extending out to cover it was not a possibility.

One wonders just how many of the ‘Georgian’ houses we admire are simply refaced. I have seen some in Bury St Edmunds where the attractive Adam-style fanlights over the door reveal timber beams from the old structure behind them and there are certainly parts of London where entire streets retain early buildings hidden behind more ‘modern’ facades. Jermyn Street in the St James area, for example, appears Georgian and Victorian, but most of those frontages conceal the original 17th century houses. The shopfronts of Paxton & Whitfield (cheesemongers since the mid 18th century) and the historic perfumery firm of Floris are two examples. In Soho many frontages, such as those of Frith Street and Compton Street, conceal buildings of the early 17th century. You can be guided through St James and Soho in Walks through Regency London.

And it wasn’t only the Georgians who saved money by remodelling the exterior of houses, the Victorians did it too. When I was researching for Walking Jane Austen’s London I located two of Henry Austen’s London homes where Jane had stayed. One, in Sloane Street, has no Blue Plaque on at all, the other has one saying that the house, in Hans Square, is ‘on the site of’ Henry’s house. But in fact both of these are simply the Georgian ‘new-builds’ that Henry leased, remodelled and refaced in the late 19th century. Just after the war a researcher managed to gain entry to both and wrote a little book which I managed to track down in the British Library. It describes how the properties were refaced, additional floors added and in the case of the Hans Square House, the front door was moved. It is possible to glimpse the back of the Sloane Street house and see the octagonal room that Jane describes in a letter to her sister Cassandra as the scene of a party that Henry and his wife Eliza threw. 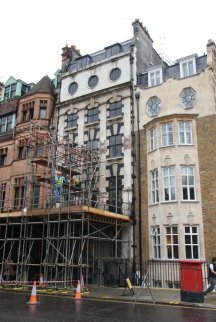 In the images the Sloane Street house is the one with the scaffolding (being remodelled yet again!). Here a new top floor has been added and the whole refaced in 1897. The Hans Square house was refaced in red brick, had a new top floor and the front door shifted in 1884.

5 responses to “A Georgian Facelift”