The Agonies of Gout

Another cartoon I acquired with some sheets of a 19thc scrapbook was this one of an unrepentant port drinker ignoring advice from the vicar about his gout. 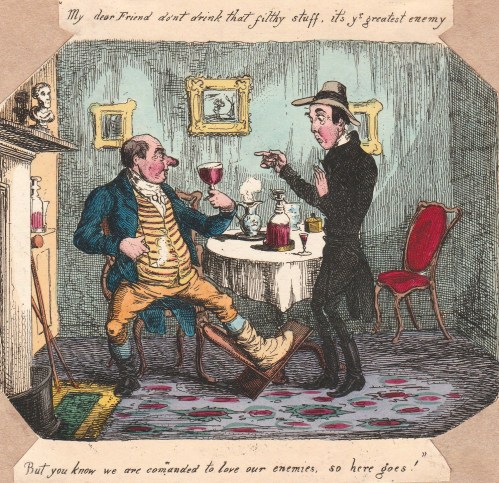 “But you know we are commanded to love our enemies, so here goes!” retorts his parishioner, watched by the bust of the Duke of Wellington on the mantelpiece. (The cartoonist was

Gout was a painful problem in the 18th and 19th century and is still just as painful today, although less common. We now know that it is caused by a build-up of uric acid crystals in the joints leading to inflammation and swelling and severe pain. It used to be thought a result of drinking too much port, but the NHS website is less clear about causes, or why, with people with similar diets, some are affected and some are not. Certainly heavy consumption of red meats and offal and alcohol are implicated, and that fits the diet of most well-off Georgian males!

The print shows the sufferer’s heavily bandaged foot propped up on a simple gout stool which is constructed from two pieces of wood, often padded. It protects the foot and the angle adjusts automatically as the sufferer shifts in his chair.

I turned to The House Book; or, Family Chronicle of Useful Knowledge, and Cottage Physician (1826), of which I have a disintegrating and obviously heavily-used copy, to see what remedies might be used at the time.

To be honest, it is no help at all on the causes and even less on cures. It quotes Theophrastus who believed that music cured the disease, the professor of mathematics at Bologna who turned to geometry on the advice of Galileo as a diversion from the pain, and cheers up its readers who may be suffering by observing that, “The torture of the gout must be dreadful, as it has often driven its victims to terminate their miseries by a violent death.” Dogs do not come out of this well – having a dog licking the afflicted part “is said to assuage the pain” or you can take your dog to bed with you in the hope the symptoms will transfer to the unfortunate animal. The author does observe that gout afflicts the rich far more than the poor, which “is not difficult to explain.” He then fails to explain it, although we can deduce that it is because of a diet richer in meat and strong alcohol.

The book does give the ingredients of a number of patent medicines, including Wilson’s Gout Tincture which “is merely an infusion of colchicum, or meadow saffron, as satisfactorily proved by Dr. Williams of Ipswich.” Colchicum is still used in homeopathic remedies for gout.

One response to “The Agonies of Gout”