Travelling The Great North Road With The Georgians

The Great North Road – the ancient route from London to Edinburgh – must have seen the foot prints, hoof prints or wheel tracks of virtually every Georgian of note. Part of the fun of tracing the historic route under today’s roads and motorways for my book Following the Great North Road: a guide for the modern traveller was bumping into Georgian characters at every bend in the road. Here I will take a dozen, almost at random, and travel north with them from London.
The great clown Joseph Grimaldi was an early commuter and would travel from his home in the village of Highgate to the London theatres. Just south of Islington on the first stage out of the city the road passes Sadler’s Wells theatre and Grimaldi often appeared there. One night in 1807, on his way back home, he was stopped by footpads on Highgate Hill, but when he showed them his watch, engraved with him in costume, they recognised him and let him go. (The print on 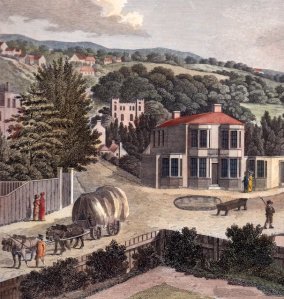 the left shows the foot of Highgate Hill).
Beyond Highgate lies Finchley Common, one of the most notorious haunts of highwaymen on the entire Great North Road. Amongst the infamous men who haunted it were Jack Shepherd who led a life of dangerous celebrity and was caught on the Common in 1724 after his fifth, and final, breakout from Newgate prison. He was hanged in November at Tyburn. Dick Turpin, whose violent exploits were romanticised by the Victorians, also haunted the Common. The so-called Turpin’s Oak tree stood just before the road reaches the modern North Circular Road and was said to be peppered with musket balls from hold-ups. The enclosure of the common began in 1816 and put an end to the dangers. We meet Turpin all along the road north, at least in the imagination of the Victorians who thrilled to Alfred Noyes’s Ballard of Dick Turpin. 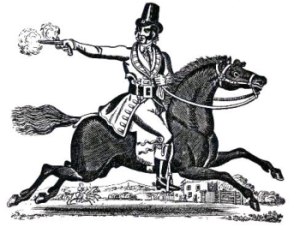 Charles Dickens was a frequent traveller along the Great North Road, right from his early days as a young journalist, and he writes feelingly about the discomforts of stage coach travel. (You can find more of Dickens’ travels in my book Stagecoach Travel. )
He certainly described the towns he passed through with an acid pen – poor Eaton Socon, 55 miles north of the capital was, in his opinion, so dull and backward that he called it Eaton Slocombe.
Another 40 or so miles north stands the oddly-named Ram Jam Inn, named, so the story goes, for the mysterious liquor that the landlord, returning from India, sold there. It was pointed out to travellers as the lodging of Molyneux, the black bare knuckle boxing champion, on the night before he met the equally great Tom Cribb at Thistleton Gap nearby on 28th September 1811. Cribb, who was the winner, stayed at the Blue Bull (99 miles), which was a small inn further north.    (The image at the foot of this post is the final one in Henry Alken’s series ‘The Road to a Fight. 1821)
Sir Walter Scott was a regular traveller from his Scottish home to London and he used the Great North Road in his novels. He described Gonerby Hill, a long and difficult hill 112 miles north of London, in Heart of Midlothian (1818) where Jeanie Deans walks from Edinburgh to London and encounters thieves and murderers at its foot. Harrison Ainsworth mentions it in his novel Rookwood (1838) where Dick Turpin crests the hill only to be faced, prophetically, with a gibbet holding two mouldering corpses.
Newark, 125 miles north of London, has a dramatic castle and a fine market square surrounded by coaching inns. Lord Byron often stayed at the Clinton Arms, then called the Kingston Arms, and mentions it in a letter of 1807. His first publisher, Ridge, had offices at number 39 on the corner of the market and Bridge Street and you can still see the handsome door-case and the knocker Byron would have used.
The Prince Regent travelled the Great North Road, and would visit Doncaster races. The racecourse is still there, 161 miles from London, and so are the handsome Georgian houses of South Parade, including the one where the Regent lodged. The print below shows the grandstand on Doncaster racecourse in 1804. 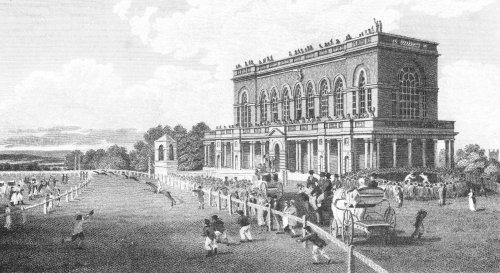 Daniel Defoe was another Great North Road “regular”, viewing it with an eye even more jaundiced than Dickens’. The village of Croft on the River Tees (237 miles north of London) was a flourishing little Georgian spa, long since decayed into a village. On the north bank of the river is one of those features that provided scope for local legends and stories to entertain bored coach passengers. The road follows the bend of the river over the tributary River Skerne and in a pasture to the right are two deep pools known as Hell’s Kettles. Unfortunately they are no longer visible from the road so the modern traveller cannot peer into their depths and see the impious farmer and his plough team who were swallowed up for working on St Barnabas’s Day. Daniel Defoe would have none of it, observing, “’Tis evident they are nothing but old coal-pits, filled with water by the River Tees.”
In an earlier post I wrote about the Regent’s Lord Chancellor, Lord Eldon, who enjoyed regular holidays at the Wheatsheaf Inn in Rushyford, 250 miles from London. The inn is now the Eden Arms and the once pretty little brook-side spot has a large roundabout in the middle of it. In his reckless youth the Chancellor was one of the numerous young men who chose the Great North Road as his route to elope to the Scottish border. We meet him again in Newcastle in 1772, armed with a ladder and assisting pretty Bessy Surtees to climb down from a window in her father’s fine half-timbered house on the corner of Sandhill and the steep hill called Side. The house and window are still there. 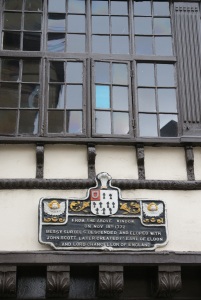 The road is into Northumberland now and passes through the town of Alnwick (308 miles north). Its ancient castle was drastically ‘modernised’ in the later 18th century by the first Duke of Northumberland, a man who married well and who changed his name to Percy from Smithson on acquiring the castle through his wife. He asked George III for the Order of the Garter, pointing out that he would be the first Percy to have been refused it. The king, who apparently did not take to the ex-apothecary, retorted, “You forget, you are the first Smithson who ever asked for it.”
Thirty miles further north and the road enters Berwick on Tweed and the eloping couples were almost on safe Scottish ground. Finally, 341 miles from London the road enters Scotland at Lamberton Bar. The famous toll house, which used to have a notice in the window reading, “Ginger beer sold here and marriages performed on the most reasonable terms”, is no longer there, alas.
East Linton (370½ miles), where the road crosses the River Tyne on a red sandstone bridge, was the birthplace in 1761 of John Rennie, the pioneering engineer and builder of London Bridge.
Only three miles from Holyrood House in Edinburgh the Great North Road enters Portobello, now a coastal suburb, but once a salt-producing fishing village with a flourishing china industry. The sands were excellent for exercising cavalry horses and it was here that the quartermaster of the Edinburgh Light Horse, Sir Walter Scott, was kicked in the head during a drill. Enforced bed-rest allowed him to finish the Lay of the Last Minstrel.
The traveller now entered Edinburgh, although if they were expecting a comfortable hotel, or even a coaching inn, they were disappointed. Until James Dun opened the first Edinburgh hotel in the New Town in 1774 accommodation was very rough indeed. Perhaps we should end with an image of Dr Johnson, whose unflattering views on Scotland are well known. He put up at the White Horse in Boyd’s Close and Boswell visited him there to find him in a towering rage because the waiter had sweetened his lemonade using his fingers, not the tongs, to add the sugar.

8 responses to “Travelling The Great North Road With The Georgians”