George III moved to St James’s Palace on his accession in 1760 and was married there the next year.  The ramshackle old palace did not suit the couple and in 1762, the year that Prince George (later to be Prince Regent and George IV) was born, George bought Buckingham House on the other side of St James’s Park.  The newly-weds moved there, renamed it the Queen’s House, and used St James’s Palace for state occasions, which included the births of the royal children.

The King held Levées in the afternoon on Wednesdays and Fridays, and on Mondays when Parliament was sitting. These were men-only occasions and formal Court dress or, for officers, dress uniform was worn. Male members of the royal family, ministers and ambassadors were expected to attend and MPs who supported the government of the day often came too. They would line the walls of the Privy Chamber (for those of the highest office) and the Presence Chamber and the King would circulate around the room before retiring to the King’s Closet and holding a Privy Council.

Drawing Rooms were held on Thursday afternoons and on Sundays after the morning service at the Chapel Royal. (Today this is the only part of the palace open to the public. Services are at 8.30 am and 11.30am, October to Good Friday.) Men and women were admitted: this was the opportunity for newcomers to Society to be presented and courtiers intending to marry would present their spouses. Drawing Rooms were also the occasion when new ambassadors were received, newly appointed senior officers and ministers would come to ‘kiss hands’ and decorations would be bestowed.Full court dress was worn, which for women meant vast hooped skirts, even when the fashion was for a high waistline, creating a ludicrous silhouette. When George VI came to the throne he allowed hoops to be dispensed with, but ostrich plumes continued to be compulsory. Jane Austen’s cousin, Eliza de Feuillide, attended a Drawing Room in her youth, before she was widowed and remarried Jane’s brother Henry. She complained bitterly about the great weight of the gown.

After the formal business was over the royals would work around the room speaking to the guests and later Queen Victoria recalled learning the art of ‘cercléing’.

After 1788, with the onset of the King’s illness, Levées and Drawing Rooms were held only intermittently at St James. In 1810 John Wallis noted, ‘…since [George III’s] last illness, this palace is almost deserted; a levee only is holden here now and then when the king comes from Windsor, for that purpose. Windsor is now the favourite residence.’ From then on one of the royal princes would preside or, for Drawing Rooms, the Queen.

On the King’s 72nd birthday in 1810 there were great celebrations on June 4th, featured in detail in all the papers. The Morning Chronicle reports that the royal family visited The Queen’s Palace in the morning but the King remained there in the afternoon while the Queen and her family processed to St James’s Palace. They were not only without the King, but also the Duke of Cumberland who was recovering from a murderous sword attack by his valet which left him badly cut around the head (or, as gossip persisted in stating, he had murdered the valet and had been wounded during the fight!) and Princess Amelia who had been in poor health for some time. The paper hints that many ladies had held off from ordering court dress in case they needed to change it for mourning. Princess Elizabeth was in tears throughout, although whether from worry about her siblings, or distress that her father could not attend, is not clear.

The Morning Chronicle devoted two full pages to describing the Drawing Room, the balls and illuminations in the evening and five and a half columns to details of the gowns worn by the ladies.

Although their parents were living at the Queen’s House (or perhaps because of that!) the royal dukes moved into apartments at St James’s Palace with, of course, the exception of the Prince Regent who had Carlton House built for himself. When he succeeded to the throne he redeveloped The Queen’s House to become Buckingham Palace, with State Apartments that removed the necessity to use St James’s. The old palace became the home of other royals, retired courtiers and  palace officials, a role it continues to fulfil as London home to the late Queen Mother, and the Duke and Duchess of Cambridge.

Here is part of the detailed description of the gown worn by every lady attending the Drawing Room for the King’s Birthday in 1810. (Morning Chronicle June 5th) 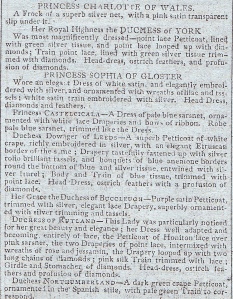