Jane Austen was born in 1775, four years before Captain James Cook was killed in Kealakekua Bay in the Hawaiian Islands, so he might seem somewhat early for this blog. Yet Cook was one of the pioneering explorers and scientist who created the world Jane lived in, a world of scientific discovery and dynamic maritime trade with London at its centre. (The portrait below is c1775, by Sir Nathaniel Dance-Holland)

Plus I seem to be bumping into Captain Cook everywhere I go on holiday! 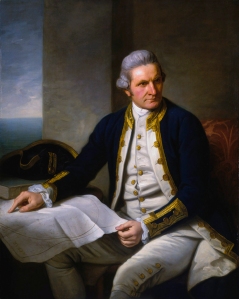 At the age of eighteen, after a prosaic start in life on a Yorkshire farm and as a shopkeeper’s assistant, Cook was apprenticed to John Walker, master mariner, at Whitby. The red house in the photo is where Cook lived, occupying the attic with the other apprentices. 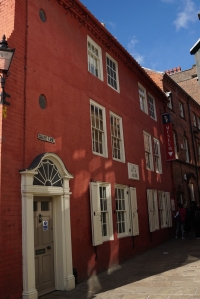 This is where I met him most recently, landing by Zodiac from a small ship and seeing the lovely little port somewhat as Cook had seen it. A half-scale replica of his little ship, The Endeavour, is tied up in the harbour (picture below, right). Even at twice the size it is hard to imagine circling the globe in her.

In 1755 Cook, by then a mate on a merchant ship, joined the Royal Navy as a volunteer and proceeded to demonstrate what a farmer’s son, with a village school education, talent and ambition could achieve in the navy. By 1763, at the age of thirty five he was appointed Surveyor of Newfoundland and in 1768, Lieutenant Cook, in command of the Whitby collier Endeavour, was tasked with sailing to Tahiti to observe the transit of Venus in 1769. 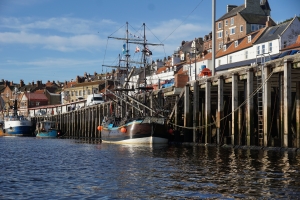 Observations of the planet Venus passing in front of the sun from various positions on the globe would, the astronomer Edmond Halley predicted, enable the distance of the earth from the sun. (Too complicated to go into here, but there’s a useful explanation on this site).

The Admiralty needed a navigator with exceptional accuracy and rigour and had chosen well: Cook made the observation successfully, then went on to complete the circumnavigation of New Zealand, landing in the bay he called Ship Cove. He revisited the Cove again on his voyage. He went on to survey the east coast of Australia, landing at Botany Bay. (Below: Ship Cove by John Webber, 1778 and the modern memorial in the cove)

Cook returned home in 1770 and was then sent on his second great voyage in 1772 which involved sailing around the world from west to east, making Cook the first man to have circumnavigated the globe in both directions. He explored far into the south towards what we now know is Antarctica, seeking for the great southern landmass that was believed to exist. His was the first crossing of the Antarctic Circle and he returned with evidence that the southern continent, of which Australia was supposed to be part, did not exist.

He landed in New Zealand again and we were lucky enough to visit Pickersgill Harbour, a tiny, wild patch in the South Island’s fjord area that Cook had used for observations. It still looked just as the artist had depicted, even to the fallen trees that Cook made such good use of – ideal for the shallow-drafted Endeavour. (Below: on-site information board and Pickergill Harbour today) 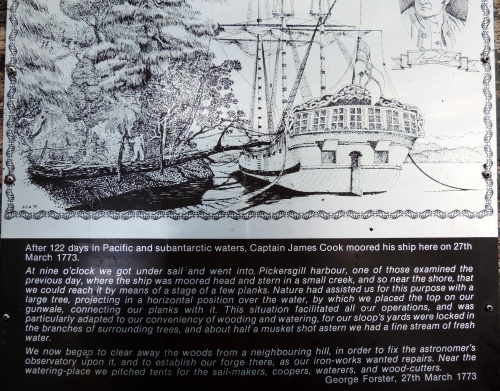 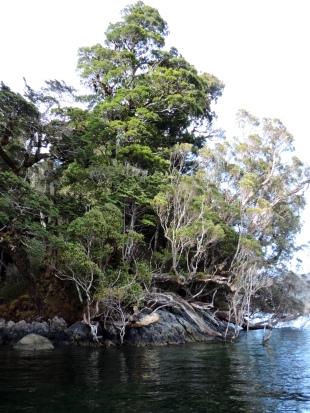 On his way home Cook explored Easter Island, the Tongan Islands, aNew Caledonia and the New Hebrides, returning in 1775.

On his third voyage , beginning 1776, he landed in Tasmania, revisited New Zealand and landed in Tahiti and Tonga. In 1778 he was the first westerner to see the Hawaiian islands but carried on to attempt to pass through the Bering Strait. Stopped by ice he returned to winter in Hawaii, but on 14th February 1779 he was killed, along with four marines, when a dispute with the islanders exploded into violence.

It was a tragic incident, not least because Cook had been rigorous in setting out rules for his crew to ensure their interactions with the local people was peaceful and fair wherever he landed. It seems that Hawaiian society was very different from the southern Pacific peoples he had become used to and a series of tragic misjudgements and misunderstandings led to the fight.

His body was disembowelled, baked and the bones carefully cleaned and removed, all in accordance with local customs showing respect for dead chiefs and important elders. The crew managed to reclaim some of the remains which were buried at sea.

Cook was only fifty one at the time of his death and one wonders what discoveries he would have made if he only had a few more years to explore.