All About April – Fools and Showers 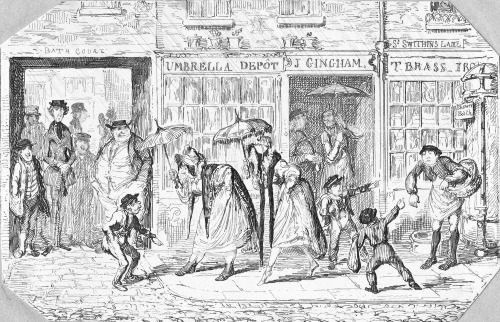 These days April is famous for its showers and its fools, and I love this illustration by Cruickshank showing two ladies caught out in the rain while everyone else is either sheltering under an archway or buying a new umbrella from J. Gingham, Umbrella Depot. I’m not sure what the three lads are doing – possibly they are up to some kind of April Fool’s Day prank. As always with these tiny Cruickshank drawings the fun is in the details – behind the pieman with his basket is a shower bath standing outside T. Brass, Ironmonger. And, of course, the scene is set in St Swithin’s Lane. There is a real lane of that name in London, running between Cannon Street and Lombard Street in the City. St Swithin’s Day is July 15th, but the connection with rain was obviously too much for the artist to ignore.

For April Fool’s Day in the Georgian era I turned to Observations on Popular Antiquities, Chiefly Illustrating the Origin of our Vulgar Customs, Ceremonies and Superstitions by John Brand (1813). They don’t write titles like that any more. Brand considered it to be of Druidical origin (but then he considered a great deal was) and comments that it was observed from ancient times all over the kingdom, and in France. “The wit chiefly consists in sending persons on what are called sleeveless errands, for The History of Eve’s Mother, for Pigeon’s Milk, with similar absurdities. ” He quotes rather a charming little love poem, dated 1798:

To  A Lady, who threatened to make the Author an April Fool

Why strive, dear Girl, to make a Fool,

Of one not wise before;

Yet having ‘scaped from Folly’s School,

Would fain go there no more.

Ah! if I must to school again,

Wilt though my teacher be?

I’m sure no lesson will be vain

Which though canst give to me?

And finally, as we are buffeted here in England with a windy beginning to the month, I’ll leave you with this delightful little watercolour sketch. It isn’t signed or dated, unfortunately.