The Road To Waterloo – Week 10. Napoleon is in a Fog, an Infamous Army Waits and Brussels Swarms With Spies

Week ten since Napoleon’s escape from Elba and the weather was so bad in France that it seemed that Spring would never arrive. Heavy frosts continued until the end of April and it would still be foggy in May: the Parisians must have thought Napoleon had brought perpetual winter with him.

There was alarm in Brussels, with press reports that the Imperial Guard had marched as far as Beauvais and that Napoleon was about to inspect the “frontier fortresses”. Wellington met Blücher on May 3rd for the conference of Tirlemont, the day Wellington had been intending to advance into France. The two agreed to mass their forces in the centre of the long line of defence, in front of Ghent and Brussels. The Russians had still not come up to join them and the Austrians were not hurrying either. Wellington could not predict when the advance would take place and he was not happy with the state of his forces. “I have an infamous army, very weak and ill-equipped and a very inexperienced staff. In my opinion they were doing nothing in England,” he told Charles Stewart.
Gentlemen in London could peruse the latest news about the situation while partaking of the “Table d’Hôte at the Adelphi Coffee-house (late Mansell’s Hotel), Adam-street, Adelphi. The Proprietor of the above respectfully informs Gentlemen frequenting the Theatres, and others, that he has established a Table d’Hôte, this and every day, at the moderate charge of 2s 6d each. Soups, Fish, Roast & Boiled Joints, Puddings etc included. Ready at 5 o’clock precisely. Choice of old Wines & Spirits of superior quality. Venison & turtle dressed every day, when in season.”
The Morning Chronicle gave the “Fashions For May”, copying the descriptions of the fashion plates in La Belle Assemblée and Ackermann’s Repository, including that for the “Angouleme Walking Dress” shown here.

The gossip columns included the news that Earl Fitzwilliam had received a present of two black swans from New South Wales and had established them in his park and that Madame Catalini was in Brussels with her husband and proposed a series of concerts.

The Morning Post commented that it would not surprise their readers to learn that, “the present Ephemeral Ruler of France” would go to any lengths to establish the size of the armies massing against him and that Brussels was a hot-bed of French spies, including an apparently respectable French lady pretending to be in Brussels to see Madame Catalini perform – she was unmasked when one of her servants was recognised and surprised destroying compromising documents. 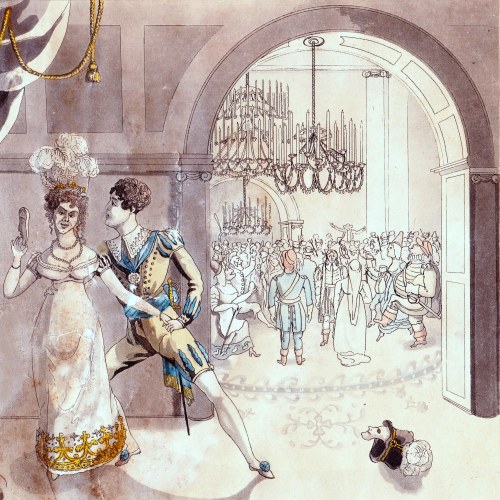 Mrs Camac held a fashionable masquerade in Portman Square. “The entrance hall and staircase was tastefully ornamented with rural arches, alcoves & hedges formed of laurel and orange branches studded with real fruit and brilliantly illuminated by variegated lamps, A full band of Pandeans enlivened the scene.” Some of the costumes worn were given: “Mr Impey, first as a bride & then as a bridegroom; Mr Barnett, a witty French hair-dresser, Mr C. Caldwell, a busy soldier’s wife,… Mr Holmes, an Irish footman…” No characters were reported for the lady guests.

Pandean bands were popular entertainers on pan pipes, as can be seen in this print. The print above, showing a detail from a masquerade scene depicts a lady holding a mask made of painted metal gauze and through the arch a number of costumes including Mother Goose, a clown and various historical outfits.

The French menace just across the Channel did nothing to reduce the popularity of the South Coast resorts and it seems that the presence of troops gathering on the south coast, with the consequent increase in the number of officers looking for entertainment in the seaside resorts, only added to the attraction. It was still rather early for the main season, but there was speculation in the press that the Queen, accompanied by her daughters, might be planning to spend a short time in Brighton for the sake of her health.