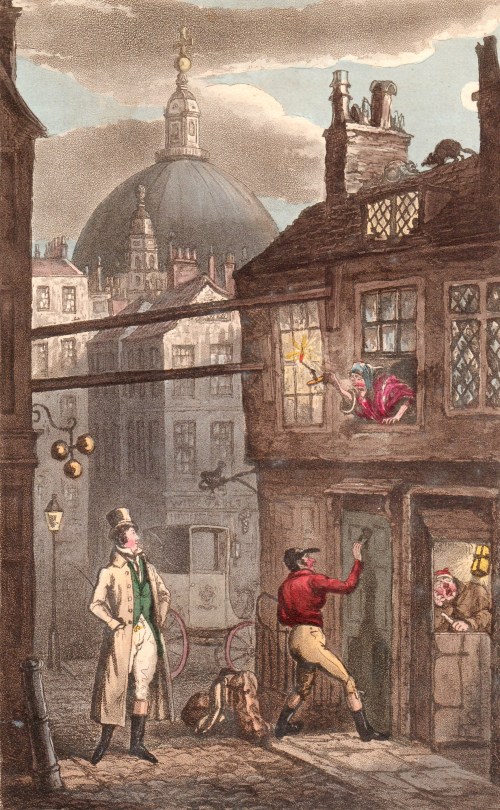 You are slumming it in Regency London – perhaps you’re in cheap lodgings avoiding your creditors, or dodging a furious father armed with a shotgun or your gambling habit has got the better of you and you are seriously out of pocket. You have found your cheap lodgings – a miserable, unheated room that you share with bedbugs, fleas, mice and the other inhabitants of your straw pallet – now you need to find something to eat. [The print above is of Logic’s lodgings in one of the Tom & Jerry tales by Pierce Egan. Note the dome of St Paul’s behind and the pawnbroker’s shop with its three gold balls on the left.]

A respectable eating house with a decent daily ordinary might be within your means, otherwise you’ll be looking for a grubbery and, in this kind of area, it is probably a hand-in-pocket shop where ready money is expected and no credit is given or even a slam-bang or slap-ang shop, the lowest form of cook shop. Even if you are clammed, sharp-set or positively gutfoundered, you’ll still be hoping that it isn’t run by a cook ruffian, a really bad cook who’ll beat all to a todge, or unrecognisable mess.

If all you can afford is buster and beeswax or bread and cheese, it will taste better if it has been toasted to make a Welsh rabbit or, failing the cheese, you may have to make do with a scratch platter or tailor’s ragout of bread and sliced cucumbers slopped in vinegar.

If there’s a smell of cooking meat the chances are it will be a sheep’s head  – baked to make a Bloody Jemmy or Field Lane Duck or boiled with onions which makes a German Duck. But that might be too expensive so you settle for a galimaufry, a hodge-podge of leftovers or a cawchery, a stew (best not to investigate the ingredients). If you are lucky it might be padded out with some naked boys – rather lumpy dumplings. Below is a detail from “Tom and Jerry Masquerading Among the Cadgers in the Back Slum in the Holy Land” with the diners tucking into their food next to the stove while a riot breaks out in the background. 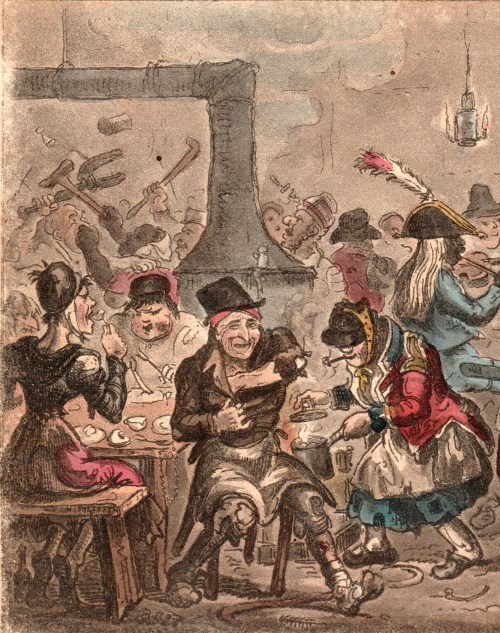 Just when it all seems hopeless and you are contemplating a diet of flummery – oatmeal and water boiled to a jelly – one of your friends turns up with a loan and you can foul a plate and polish a bone with them and treat yourselves to an alderman – a fine roast turkey with a garland of sausages in place of the alderman’s chain of office.

As for what you’ll drink with your alderman, that’s another story – but the chances are you’ll be washing it down with a tankard or two of heavy wet. 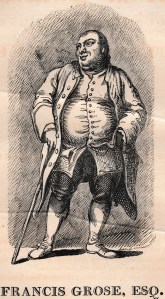 Francis Grose toured the back-slums and the rookeries of London in the 1780s collecting cant and slang terms for his Dictionary of the Vulgar Tongue,  assisted (or possibly supported) by his servant Batch. Judging by his portrait Grose had sampled plenty of naked boys, aldermen and Bloody Jemmys himself. He inspired a number of imitators (and downright plagiarists) but all these late Georgian slang dictionaries are arranged in alphabetical order of the terms defined.  Regency Slang Revealed  takes four of them and organises them thematically, with an index – the perfect guide for the explorer of the Regency underworld. 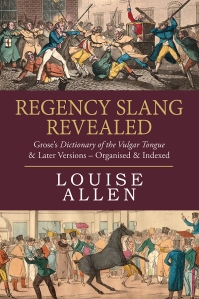