On the first, and only, sunny Sunday of the entire 100 Days, Napoleon held a great military parade at La Place du Carrousel in Paris. 25,000 troops passed before him, comprising five regiments of line, four of the Young Guard and a party of recruits, not yet in uniform. They shouted Vive l’Empereur as they marched and he came down from his podium to join the Guard. Paris was full of troops now, as they marched through towards the border.
By the end of May the total armed forces available to Napoleon had reached 198,000 with 66,000 more in depots training up but not yet ready for deployment. 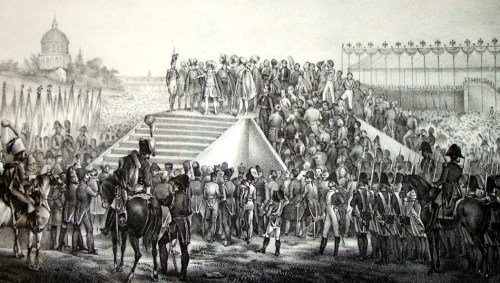 The sun had deserted Paris again and it was a cold, grey day as 200,000 people assembled in the Champ de Mars, most of them unable to see what was going on within the wooden arena built for the ceremonial. The court, the university, the magistrates, all turned up in their robes and then had to wait for hours until Napoleon finally appeared in a purple mantle that was too tight and too short and which gave him great problems as he came down the steps to his throne. One observer described him as looking “ungainly and squat”. Declarations and promulgations were read, speeches were made and a Te Deum sung. Napoleon then processed to a throne on a pyramid, surrounded by soldiers brandishing swords and flags while he distributed eagles to the National Guard and the army.

I was thrilled to see two of the actual eagles Napoleon distributed at the “Bonaparte and the British” exhibition at the British Museum. They were captured at Waterloo and sixty seven of them were presented to Wellington by a grateful King Louis. The banners are beautifully worked in silver bullion thread on silk. 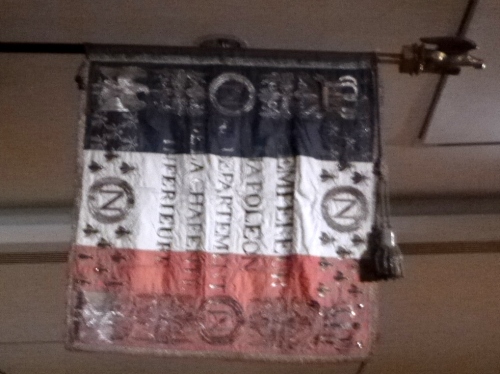 A British observer noted that all the enthusiasm came from the troops – the ordinary people were mainly silent.
In London the ton were making ready to depart to country estates, spas or seaside resorts.  “Fashionable Departures” noted in the Morning Post for June 1st included the Duke and Duchess of Newcastle, off to Lincolnshire; the Duke of Marlborough to Sion Hill; Mr Drake, MP, for Tunbridge Wells and, more ominously, “Captain Mackenzie for the continent.” The sun was shining at last and farmers were getting ready for haymaking. Below is an idyllic country scene of harvesters 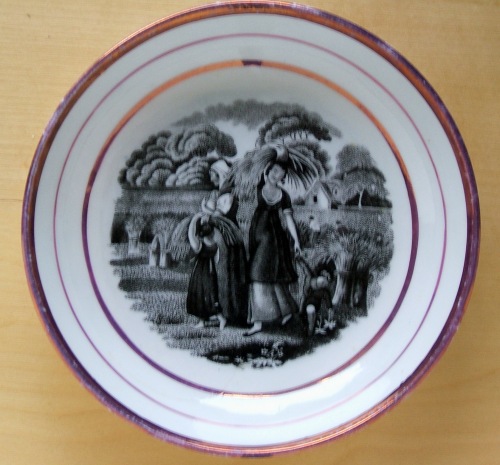 Near Brussels things were clearly moving towards a confrontation. On 29th May the Earl of Uxbridge held a review of British cavalry near Ninove, a major event which was attended by Blücher, the Duke of Brunswick, the Prince of Orange and the King of the United Netherlands as well as a large number of Russian and Prussian generals. The day before there was a parade in Brussels and Wellington hosted a dinner. The next day the cavalry assembled in the meadows – almost 7,000 in number. “46 of the finest squadrons of cavalry ever seen were drawn up in a place in their lines, with 6 troops of Horse artillery and a Brigade of rockets,” with thousands of spectators, including “all the haut ton of Brussels,” according to one spectator.
It was followed at 5 o’clock by a banquet for a hundred guests, all accompanied by “the finest wines.” Apparently the meal ended and the party broke up at 8 o’clock, far too early for Marshall Blücher, (shown below left) a man who enjoyed hard drinking. 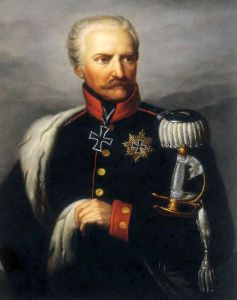 Despite this clear indication that the fighting could not be far off, the British in Brussels thought that the Allied troops would march off to meet the French close to, or over, the border. Visitors to Brussels and to Flanders generally, continued to arrive on sightseeing trips, quite confident of their personal safety.