The Road to Waterloo: Week 16. The Young Men Frolic, Napoleon Invades, the Duchess Holds her Ball – the Conflict Begins 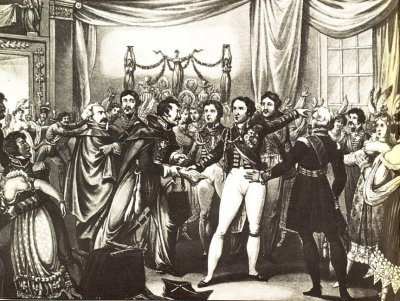 On June 11th Napoleon marched an army of approximately 120,000 men to war against Wellington’s 93,000 and Blücher’s 115,000 men. Wellington was still poised to invade France and was uncertain whether the French would halt at the frontier or whether he would have to meet them once they had crossed it. His main anxiety was to protect the “hinge”, the weak point between his army and Blücher’s.
Nick Foulkes in his engrossing social history of the months leading up to the battle, Dancing Into Battle, notes a “holiday atmosphere” amongst the Allied officers and the upper classes living in and around Brussels. “They may have been assembled to fight the most daunting military commander of the age, but in many cases the regiments were filled with and run by boys still in their teens and on their first trip abroad. They were young, they had foppish uniforms and they were having the time of their lives.”
Horse racing was a particular favourite amongst the young officers. The Earl of Albermarle (sixteen at the time) recalled that, “Races on a grand scale came off at Gramont on 13th June…Everyone was determined to make the most of the holiday.” The crowds numbered thousands.
The impact of so many spirited young men on Brussels was, probably, predictable. Wine, women, parties, petty vandalism (no statue was safe) and pranks kept the officers busy when they weren’t with their troops, and the charismatic teenage ensign James, Lord Hay, ADC to General Maitland, was one of the leaders of the mischief. “Very poor I hear…[but] very good looking I know and particularly gentlemanlike,” sighed one smitten young lady. He took to jumping the boundary fences of the Parc, the smaller-scale Brussels equivalent of Hyde Park, and reveled in being chased by the park keepers and the local gens d’armes. It was only when complaints were made to Wellington that he stopped.
On the 15th the French crossed the Sombre at Charleroi which placed their forces in the gap between the cantonment areas of Wellington’s army, to the west, and Blücher’s army to the east. Napoleon had found the weak spot in the Allies’ defenses with his usual tactical brilliance – Wellington had concentrated his forces at Nivelles, twelve miles from the Prussians who were at Ligny.
The news of the French move to the frontier reached the London papers on the 15th and the country must have been bracing itself for the news of the coming clash. The Morning Post reported receiving “advices from Paris of the 11th inst. stating that BONAPARTE had left the city for the head-quarters of the Army of the North and that orders for laying an embargo on all shipping had been sent off to several ports in the channel. The communication between this country and France was therefore expected to be immediately cut off. All accounts agree in stating that hostilities would commence about this time, and the present day (the 15th) is mentioned by some as the particular day, on which a blow would be struck, every arrangement for that purpose being complete. There has been no arrival of French Papers since Monday.”
Thursday 15th was, of course, the date set for the Duchess of Richmond’s famous ball, shown in an entertaining, but particularly inaccurate picture at the top of this post. The Duke, perhaps maintaining his pretense of insouciance, assured her it could go ahead, although by the evening rumours were already circulating around Brussels. Some officers were already leaving the city to go to their troops, others were coming in, unaware as yet of the increasing certainty that Napoleon was on the move. In the event the news hit the revelers at some time around 11pm. Lord Uxbridge announced, “You gentlemen who have engaged partners, had better finish your dance, and get to your quarters as soon as you can.” In full dress uniforms and evening slippers the young officers headed south.
By the 16th Wellington’s forces were still all attempting to concentrate around Quatre Bras to meet Marshal Ney’s troops – not all of them made it in time for the battle. Meanwhile Napoleon led the main French force against the inexperienced Prussian troops at Ligny. The Prussians suffered heavily, but thanks to Blücher’s generalship, and a chaotic French mix-up which sent 16,000 French troops marching from Quatre Bras to Ligny only to be immediately recalled, the Prussians were able to retreat in relatively good order.

On the 17th Wellington had held back Ney at Quatre Bras (above), but with the Prussian defeat at Ligny he now had the French army on his eastern flank. Fortunately the Prussians were retreating northwards to Wavre, not east back to their base, and the armies were able to stay in contact while Wellington fell back to the ridge at Mont St Jean. That evening the heavens opened in a thunderstorm of epic proportions. As Private Wheeler of the 51st Regiment wrote later, “The ground was too wet to lie down…the water ran in streams from the cuffs of our jackets.” The exhausted men of both sides faced spending the night soaking wet, cold and muddy with the prospect of battle the next day.
That day the London papers were confidently predicting that the first action in the conflict would be the Allies invading France. Meanwhile the social round in London continued unabated with the society pages full of routs and balls.