I get my daily dose of the wonderful ravens at the Tower on Twitter from @RavenMaster1, thus doing my bit to support the realm because, as everyone knows for a fact, the continuing presence of ravens at the Tower is essential for the very existence of the nation.

The importance of ravens might be A Fact, but there are also myths about objects key to the existence of London, most famously, the London Stone. Normally this is quite difficult to get a good look at, because for years it has been stuck behind bars in a building that is now being demolished. Until it can be returned to Cannon Street, where it has been since at least the 11th century, it is on display at the Museum of London.

So what is the London Stone? No-one really knows. It is a block of Clipsham limestone, heavily weathered, with a rounded top with two grooves in it. An 11th century reference to it as ‘the Londenstane’ is the first written record, but it is probably Roman in origin. Cannon Street Station, very close to its traditional location, was the site of the Roman Governor’s Palace, so it might be a stone from there. There is also a suggestion, without any foundation, that it is a Roman milestone marking the centre of Londinium. 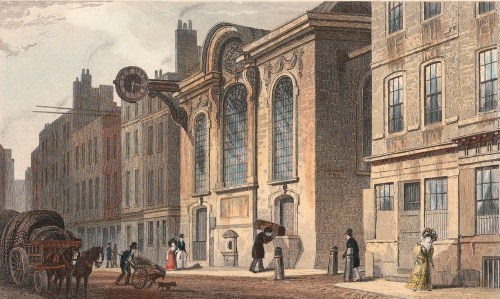 In 1450 the Kentish rebel Jack Cade, calling himself John Mortimer, led his men into London. He struck the Stone with his sword, announcing, ‘Now is Mortimer Lord of the City!’ Shakespeare makes much of this incident with a heavily-embroidered version in Henry VI Part 2.

The print of 1831 above shows it – or, rather, its protective housing – as it was from the 1780s, in the wall of Wren’s church of St Swithen’s. You can see an oval opening just behind the man who appears to be carrying something suspiciously like a coffin on his shoulders. The Stone has always been somewhere close to this location, but it has shifted about somewhat over the years. Originally it was on the southern edge of medieval Candlewick Street (the early name for Cannon Street), opposite the ancient church of St Swithen. In 886 King Alfred had laid out a grid of streets for Saxon London and the Stone would have been central in that, which might account for its significance.

The Great Fire swept over the site in 1666, leaving its mark on the Stone and destroying St Swithen’s, but it was still of enough significance in 1720 to have a protective housing built over it. When Wren’s new church was built the Stone in its shelter was moved across to stand in front of it and later it was built into the wall of the church, still in the 1720 cover.

St Swithen’s was gutted during the Blitz, but remained standing as a ruin, complete with the Stone, until the 1960s when the church was demolished. The photograph below is 1962, just before the demolition. An unlovely building (111, Cannon Street) for the Bank of China was built on the site and the Stone was housed – or, rather, caged –  behind bars in the front of this building.(Colour photo).

Now the block is being redeveloped and the Stone is in the Museum of London for safekeeping before it can be replaced on site.

The earliest surviving list of Canterbury Cathedral’s London properties, which dates to between 1098 and 1108,mentions property given by a certain “Eadwaker æt lundene stane” (“Eadwaker at London Stone”). People living near the Stone adopted it as part of their surname, for example Ailwin of London Stone who was the father of Henry Fitz-Ailwin the first mayor of the City of London ( 1189 and 1193). Their house stood on the north side of St Swithin’s church.

By the 17th century the Stone was a tourist attraction  and remained an address for businesses. By that time it has accumulated a mish-mash of legends and ‘history’ – it had  been placed there by Brutus, by, King Lud, it was  Druidic sacrificial altar and finally that an ancient prophecy stated that, ‘So long as the Stone of Brutus is safe, so long will London flourish’. Unfortunately this appears to have been entirely made up by the author of an article in the journal Notes and Queries in 1862! So – catch the London Stone in all its enigmatic mystery while you can still see it from all sides.