People have been smoking tobacco in Britain since the late 16th century and for most of that time they were using clay pipes to do it. Clay tobacco pipes are a huge study in themselves with learned societies devoted to tracing their manufacturers and the evolution of the various types, but in their day they were virtually as disposable as a cigarette end. I dig them up in my garden occasionally – my house is built on an old farmyard site  – and here are two. The larger, with a shamrock stamped on it is Victorian, the smaller from a time when tobacco was more expensive and bowls were smaller, is 18th century. 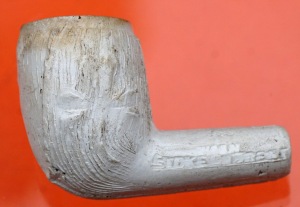 The Victorian bowl has a maker’s stamp on it from Stoke on Trent, one of the major centres for pipe manufacture, although they were made anywhere there was a pottery industry. There are still some clay pipe makers around today producing them for film and TV productions and for clubs, but the industrial scale manufacture ended as late as the 1950s.

You can still visit a clay pipe factory preserved as it was the day the workers put down their tools for the last time in 1957. The Broseley Pipeworks in Shropshire is now one of the Ironbridge Gorge museums and pipe making began on the site in the 17th century. The factory is housed in converted cottages which adds even more to the atmosphere. In the view of the yard you can see the pile of clay in the shed at the back, waiting to be transformed into pipes by a method that was unchanging for hundreds of years. On the other side of the yard was the oven where the pipes, stacked into containers called saggars (then was actually an occupation of ‘saggar-maker’s bottom knocker’, but that’s for another day…), were fired.

Inside the dusty space are moulds for the long-stemmed ‘churchwarden’ pipes, like those the gentlemen at the top of the post are smoking. The long stem gave a cooler smoke, but they were easily broken. Prints depicting working people often show them smoking pipes with only a stub of a stem so they could safely keep them pipe in their mouths while they worked. One mould, opened out, is on the front bench. The device on the rear bench with the long handle is the press for hollowing out the bowl of the pipe. 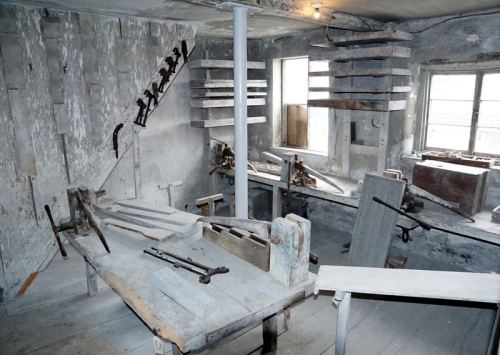 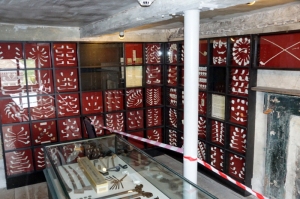 The popularity and availability of cigarettes finally killed off the clay pipe but for hundreds of years tens of thousands were turned out. In an inn a customer could order a pipe along with his ale and lead tobacco boxes were provided on the tables for communal smoking. The lead kept the tobacco moist and they contained a weight-plate inside to press it down. They are scarce now – many got knocked off pub tables and the soft lead was damaged on stone floors – but I own a dozen or so. This example, complete with its internal plate and a wonderful lid covered in grape vines, shows crossed churchwarden pipes on its side. 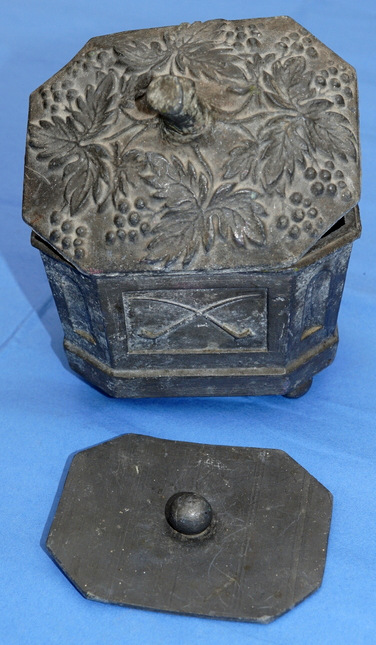