A Most Scandalous Lady

When I was researching Knightsbridge for my last post I came to Kingston House (shown below in a Victorian print) and read about its extraordinary first owner, Elizabeth Chudleigh. I write historical romances, but I would never dare attempt a plot with anything like the story of her romantic life – no-one would believe it for a moment! 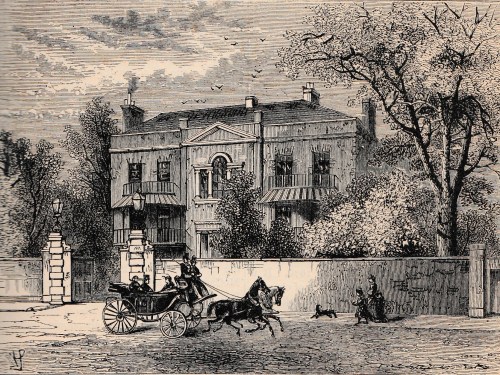 Elizabeth (c1720-1788) was the daughter of Colonel Sir Thomas Chudleigh who had a number of influential friends, including the Prime Minister, Sir Robert Walpole. Perhaps it was due to his good offices that she became a maid of honour to the Princess of Wales, wife of Frederick, Prince of Wales and mother to George III.

At court she met and became engaged to the Duke of Hamilton who promptly departed on the Grand Tour. While he was away Elizabeth met Captain Augustus John Hervey, a son of the Earl of Bristol who fell passionately in love with her. At first Elizabeth did not return his feelings,  but her aunt who favoured the match intercepted the duke’s letters from the continent and eventually Elizabeth, piqued at his apparent neglect, secretly married Hervey in 1744.

Incredibly the couple managed to keep their marriage a secret from the court and their families, even though it soon became apparent that it was not a success. Elizabeth was unfaithful to Hervey, and he probably was to her, and they effectively parted in 1749.

The Duke of Hamilton returned to England from his Grand Tour, still assuming they were engaged and pressed for a marriage date, only to be astounded by Elizabeth’s refusal. However much she might have wanted to marry a duke, she was not, at this point, ready to commit bigamy. Hamilton finally gave up and married one of the beautiful Gunnings sisters.

Elizabeth’s family were furious with her for apparently refusing a duke on a whim, and she left the country for to the court of Frederick the Great where she was very popular. On her return to London the vivacious “Miss Chudleigh” was equally in demand, and enjoyed a very lively social life as the portrait of her in the role of Iphegeia at a masque suggests! (Unknown artist 1749)

“… it has been asserted this lady appeared [at a masquerade] in a shape of flesh-coloured silk so nicely and closely fitted to her body as to produce a perfect review of the unadorned mother of mankind, and that this fair representative of frailty, … had contrived a method of giving as evident tokens of modesty, by binding her loins with a partial covering, or zone, of fig-leaves.” (The Life and Memoirs of Elizabeth Chudleigh. 1788)

But Elizabeth was still stuck with her secret husband and it is said that she eventually tore the leaf out of the church register where the marriage was recorded and bribed the clerk to say nothing. At which point her husband unexpectedly became Earl of Bristol so she bribed the clerk again and returned the page to the register!
At this crucial point she fell in love with the Duke of Kingston and became his mistress. Kingston and Bristol agreed between them that Bristol would relinquish all claims to Elizabeth and a marriage was performed on March 6th 1769 between the Duke of Kingston and Elizabeth – despite her first husband being very much alive and no divorce having taken place.
For years they lived as man and wife at Kingston House. Elizabeth became a leader of fashion, but in 1773 the duke died and she travelled to Italy. While she was away a Mrs Craddock, a witness to the true marriage, turned up at her solicitors and proceeded to blackmail the “Duchess”. When no money was forthcoming Mrs Craddock went to the Duke of Kingston’s family and all hell broke loose. 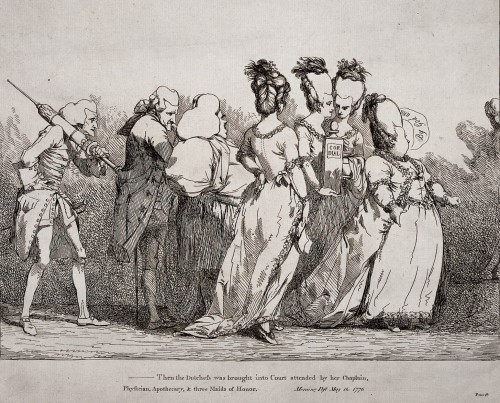 Proceedings were brought and Elizabeth returned home to face trial for bigamy. The case began on April 15th 1776 and she was, unsurprisingly, found guilty. At the time the penalty for bigamy was transportation or imprisonment, but Elizabeth claimed the privileges of a peeress and was discharged without sentence.
But her “in-laws” were still in hot pursuit of the property she had acquired from the duke on his death and she knew she had to leave the country. She kept her planned flight a secret, even going to the lengths of inviting a large number of people to a dinner party on the night in question. They arrived to find Kingston House empty.
Elizabeth lived in Calais for a while, then moved to Paris under the protection of the king’s brother. She was residing there when her lawyers told her that a suit concerning an estate she had bought with the duke’s money had been found against her. She flew into such a furious fit of temper that she burst a blood vessel and died on August 26th, 1796. Perhaps a fitting end to such a tumultuous life!