The Story of a Square 2: Berkeley Square

Berkeley (or Berkley as it is often spelled on early maps) Square was built on the farmland owned by John, 1st Baron Berkeley of Stratton, a Royalist military commander in the English Civil War and close friend of James, Duke of York (later James III) who did very well for himself after the restoration of Charles II . Amongst other things he was a co-founder of the Province of New Jersey. Berkeley acquired extensive farmland to the north of the Exeter Road in London, now Piccadilly, and in 1665 he had a mansion built there. Today it would occupy the block bounded by Piccadilly, Stratton Street and Berkeley Street, with its gardens (partly designed by John Evelyn) stretching northwards. In the map below of 1682 ‘Berkley House’ can be seen just above the ‘ETC’  of The Road to Exeter Etc.’ (The area marked ‘St James Park’ is now known as Green Park.) 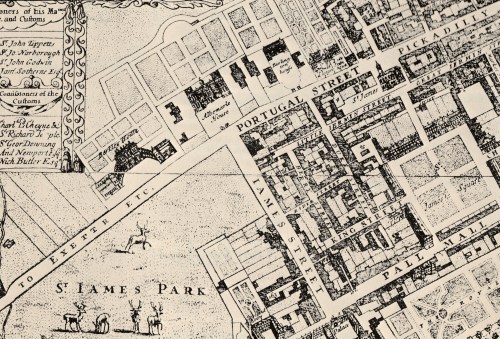 Evelyn records that it cost “neare 30,000 pounds” and called it a “palace”. After Lord Berkeley’s death in 1678 his widow sold off strips at the side of the grounds to create Stratton Street and Berkeley Street, much to Evelyn’s disgust. Princess (later Queen) Anne occupied the house 1692-5 during a spat with her sister Queen Mary and in 1696 it was sold to the Duke of Devonshire and renamed Devonshire House. It was rebuilt after a fire in 1734/7 and this is the house that can been seen in Horwood’s map of 1799/1819. The reservoir in Green Park mentioned in a recent post can be seen at the bottom.

One of the conditions of the sale was that view over the land to the north of the gardens should be unobstructed and this is one reason why, when the area was developed, that Lansdowne House is set to one side with its gardens respecting the view from the rear of Devonshire House and there was no building along the south side of Berkeley Square.

The square was laid out in 1730 with houses on the east and west sides.The east side was the first to be built and was finished about 1738 and the west side was completed in 1745. Of these houses only the western side remains intact – the 1930s saw the replacement of the eastern side and the garden wall of Lansdowne House – and the site of Mr Gunter’s famous establishment in the south-east corner is now under a branch of Prêt. The customers still take their refreshments outside to eat under the plane trees – although rather less elegantly than Mr Gunter’s patrons would have done. It was originally the shop of Dominicus Negri, an Italian pastrycook, who set up there in 1757, trading as The Pot and Pineapple.

In the centre was  an equestrian statue of George III – a not very successful effort whose legs soon collapsed. It was replaced by the little pump house with a Chinese roof which has survived. The famous plane trees are perhaps the most striking survival of the Georgian square and were planted in 1789.

Ackermann’s Repository featured the square in September 1813 with this view which appears to be the south-west corner with the wall of Lansdowne House’s gardens in the background.

According to the text “This square is distinguished from all the others in the British metropolis by its situation on the side of a hill, which gently slopes from north to south. the houses on the north side are, upon the whole, rather mean; those which form the east and west sides, though many of them, individually, very good buildings, do not, from the want of regularity, appear altogether to such advantage as where greater attention is paid to that point, and where the site is more favourable to it… The area, which forms an oblong square, containing about three acres, is inclosed by an iron balustrade; and the inhabitants, after the example of their neighbours, have, of  late years, caused it to be planted extensively with shrubs, which have thriven very rapidly, and give a rural air to the whole.”

This late Victorian print shows the southern end of the square, looking west with the Lansdowne wall on the left.

Nowadays it needs some care to recapture the Georgian spirit of the square, but it can be done, especially when sitting in the shade of the plane trees and looking at the wonderful ironwork of the western side. But don’t expect to hear a nightingale singing in Berkeley Square – they probably flew off in the 1730s when the builders moved in!

You can visit Berkeley Square on the Mayfair walk in my Walking Jane Austen’s London.

High class pastry cooks and caterers were an essential part of the infrastructure of Georgian London. The most famous, of course, was Gunter’s in Berkeley Square but others included Parmentier’s in Edward’s Street (now part of Wigmore Street)  and Farrance’s on the corner of Spring Gardens and Cockspur Street, a popular resort for ladies visiting the exhibitions in the Spring Gardens’ galleries.

These luxury establishments were not cheap. This bill from Parmentier’s to a gentleman living in Harley Street is for a bottle each of orange and lemon ‘syrop’ and a dozen rout cakes and totals 18 shillings.

Gunter’s establishment was in the south-east corner of Berkeley Square and was originally the shop of Dominicus Negri, an Italian pastrycook, who set up there in 1757, trading as The Pot and Pineapple. Pineapples, often referred to as ‘pines’, were an exotic luxury, so expensive that people would hire them to form the centrepiece at a dinner party and then return them, uneaten, the next day, so the name of the establishment hinted at its quality. This pineapple below is from the frontispiece of Nutt’s The Complete Confectioner (1815).

Negri took Gunter into partnership in 1777 and by 1799 Gunter had taken over the business. He obviously established his reputation for quality as this extract from The Morning Chronicle, 16 June 1801, shows.

Mrs Morton Pitt opened her house in Arlington-street, for the first time, upon the debut of her beautiful and accomplished daughter in the beau mond: this of course attracted a most brilliant and dazzling assemblage of all the fashionable world; and, whether from the condescending manner of the beautiful hostess, or the high glow of spirits which universally reigned throughout the whole company, the writer protests he has not, in the career of fashion of this year, seen so much conviviality. The supper was such as everyone must expect, when they hear that Mr Gunter, of Berkeley-square, superintended in that department.”

He did not cater only within London. On 25 August 1804 The Morning Post reported, in its Fashionable World column:

“Lady Smith Burgess’s Fete at Havering Bower in Essex…about 200 of the neighbouring nobility and gentry, and many others from town were present…. About five o’clock [in the afternoon] the company…returned into the Saloon, where a most sumptuous Breakfast was set out. The entertainment consisted of every delicacy which the munificence of her Ladyship could provide, and the taste of Mr Gunter, the confectioner, could display.”

I cannot find any advertisements in the London newspapers for Gunter’s – possibly the glowing references in all the accounts of parties, masques and balls was sufficient.

Mr Gunter kept a very fine house in the village of West Kensington, set in 30 acres of grounds which contained the kitchen gardens, orchards and hothouses that produced the vegetables, and more importantly, the pineapples and exotic fruits for the business.

It was his ice creams that he is most known for today. They were made from fresh cream, fresh fruit and sugar and were sometimes frozen using ice shipped in from the Arctic as well as from English ice houses. During the summer the fashionable would drive their carriages to Gunter’s and the waiters would bring out the ices to be consumed under the plane trees that still shade the square. It was considered perfectly respectable for a lady to take tea with a gentleman there. Gunter also enjoyed royal patronage – if enjoyed is quite the right word. Between 1819 and 1828 the Duke of Sussex ran up unpaid bills of almost £700 with him! 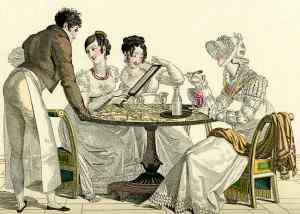 This print shows young ladies chosing their ices in a Paris confectioner’s.

Gunter’s business continued until 1936 when the east side of the square was demolished and it moved to Curzon Street. By the 1950s the tea shop closed and the catering business continued, only to be shut down in 1976 as more modern tastes and budgets could no longer support the high style of the operation.

Today there is still a catering establishment on the site of the Berkeley Square shop, and the customers still take refreshments from there to eat in the square under the plane trees. In this picture of the square in 2013 you can just see the red sign – although what Mr Gunter would have made of Prêt is anyone’s guess!