I nearly always blog about the ‘long’ Regency, the era in which almost all my books are set, but like most of us who are passionate about history, any opportunity to get closer to it fires the imagination. One of the best ways of doing that is living in an historic building. Some people are lucky enough to own one, but for the rest of us the Landmark Trust provides brilliant opportunities to live in eras ranging from the Middle Ages to the mid 20th century.

This month I have stayed in three West County Landmarks – two castles (nothing says Social Distancing like a castle), one medieval and one Tudor, and a Listed mid-century house and I thought I’d share them with you.

The first is Stogursey Castle near Bridgwater in Somerset, that just happened to be built by my husband’s distant great grandfather, William de Curci. Stoke de Curci was corrupted into Stogursey, hence the unusual name..

The castle itself is a ruin of curtain walls surrounding the central space where the keep used to stand. 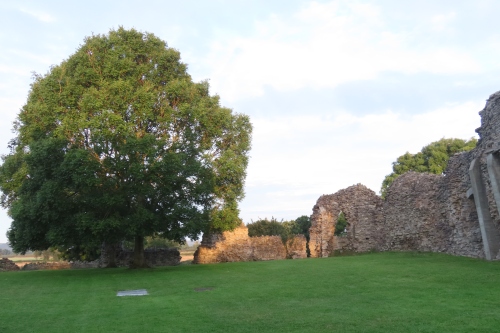 The castle gradually fell into disrepair after the Wars of the Roses but the gatehouse, was  converted into a cottage in the 17th century. One side incorporates the base of a tower and the rest fits into the section where the gate itself would be. It was repaired in the 19th century and then fell into almost terminal decline until rescued by the Trust who discovered a bridge of about 1300 in the process. 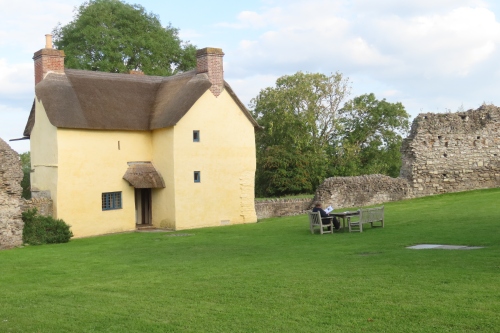 We were enchanted to have a sitting room with arrow-slit windows. 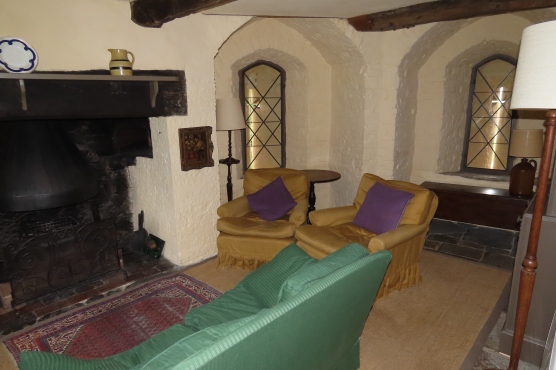 The best view was just after sunrise and the only disappointment was that we couldn’t raise a drawbridge. Several walkers came and knocked, clearly under the impression that we could sell them tickets to get inside! 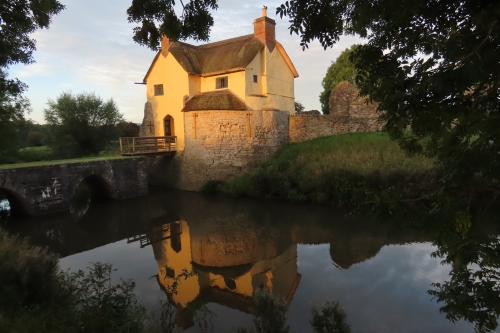 From Stogursey we went to Anderton House, near Barnstable, and couldn’t have found a greater contrast. The house was commissioned in 1969 and is one of the few houses of the period to have Grade II* Listed status. 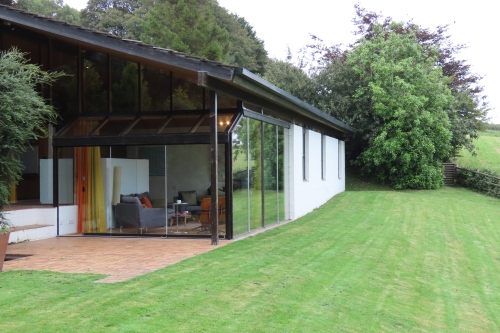 The view was wonderful and we enjoyed the simple. pared-back design. In the centre, between the living room and kitchen/dining room was a small, open study space (the white wall behind the sofa), as specified by the original owner, who liked to work in the heart of things. I even managed to write a chapter there on a rainy day. 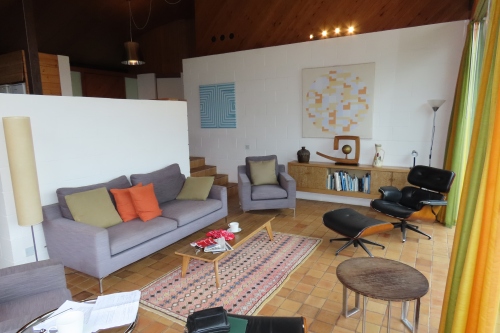 From our 20th century comforts we travelled on to the South Devon coast and Kingswear Castle, opposite Dartmouth Castle. Kingswear Castle was completed in 1502, a Tudor fortlet to defend a significant harbour.  The position is dramatic, the steps (inside and out) guarantee toned calf muscles by the end of the stay and the views are amazing. Here’s the castle from the opposite bank –

And here is the view across the River Dart to Dartmouth Castle in the early morning. 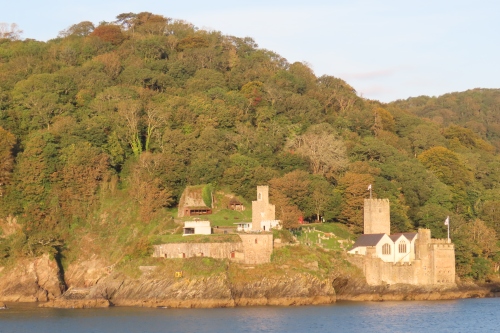 Stogursey Castle gave me the opportunity to soak up general atmosphere but Kingswear has far more practical experiences. The castle was, when it was built, absolutely state of the art. It possessed the first gun ports that allowed cannon to be trained in a wide sweep of fire and these gun ports remain on the lowest level in the gun battery (picture below). They are low in the walls because the guns were on wooden sledges, not on wheels, and were dragged into position. Above some of them you can see the small apertures that may have been sighting holes for the gunners. Even with the primitive cannon of the time the pair of forts between them could cover the width of the river. 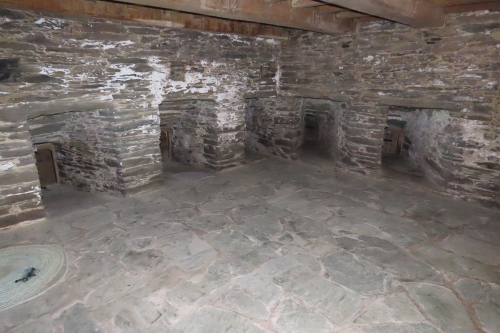 Then artillery design improved and the range rapidly increased to the point where Dartmouth Castle alone could fire right across the estuary and Kingswear became more or less redundant after fifty years. It was manned during times of emergency and saw some action during the Civil War, but then there was a fire and it was allowed to fall into decay. In 1855 a wealthy young man, Charles Hayne Seale Hayne (yes, that is the correct name), bought it and turned it into his summer residence. He later became an MP and held office in Gladstone’s government. After his death it had several owners, was occupied by the Marines during the 2nd World War and was rescued again in 1957 by the MP for Torquay as his constituency home. In 1987 he sold it to the Landmark Trust.

Living in the castle now, one has the benefit of a modern kitchen and comfortable sitting room and bedroom, but there are constant reminders of the original purpose of the castle. There is modern plumbing in a bathroom on the roof, in the position where a firing platform would have allowed defenders to shoot at attackers on the landward side – the slope is so steep that the top of the castle is virtually at the level where today one parks the car. This meant that I could conveniently arrange the contents of my washbag in the sockets that carried the beams supporting the platform and could brush my teeth imagining the gunfire and shouts echoing overhead.

The position of the bathroom meant that one had regular experience of living with a stone spiral staircase spanning four floors. It was tough enough in modern clothing and not carrying anything, but negotiating it at night gave me a vivid sense of what it must have been like for defenders, probably in some kind of armour or chainmail, hurrying up and down during an attack. [The image below has been copied from the Landmark Trust website] It also made me wish that the Landmark Trust had seen fit to reinstall the garderobe which was discovered in the alcove that Seale Hayne had used as a wine cupboard and into which a later occupant had installed a large window. It is now in the bedroom. 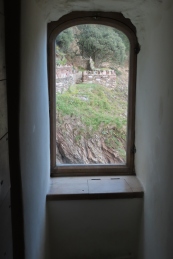 Finally, to top off Kingswear’s historical experience, there is the 2nd World War blockhouse. 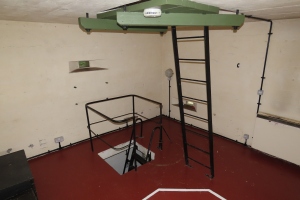 I look back on ten days experience of the Middle Ages, the early 16thc, the English Civil War, the 2nd World War and the 1970s with my imagination stimulated and ideas jostling for attention – and of course, in expeditions out from our Landmarks I discovered treasures that fitted ‘my’ period perfectly – a very early steam engine and a delicious little Regency ‘Gothic’ house in Totnes, which is surely going to have a place in a future book.

2 responses to “Living In History”