The Road to Waterloo – Week Eight. The Tricolour Floats Throughout the Empire – and Is Lady Roseberry To Be Turned Naked Into the Streets?

Londoners would have been cheered to know just how Napoleon was struggling to produce a new constitution and hold the government together. On Saturday 22nd April he finally published the new document, breaking with the European-wide ambitions of his previous two Imperial constitutions by making it clear that this version was designed to “increase the prosperity of France by the strengthening of public liberty.” The new constitution was to be approved by a public plebiscite – always supposing the various disputing factions ever showed enough interest to vote. But at least the Emperor was cheered up on the 18th to receive the news that the Duke of Angoulême had capitulated. Grouchy wrote from Avignon, “Sire, I have the honour to announce to Your Majesty [that]… the tricolour flag floats throughout the territory of the Empire.”
The Monday newspapers carried reports that 200,000 Russian troops were marching towards the Rhine in support of the Allies but were not expected to be in position until May. “The same number of Prussians will very shortly be upon the French frontiers and it is asserted that 80,000 of them are already on the borders of the Rhine.” 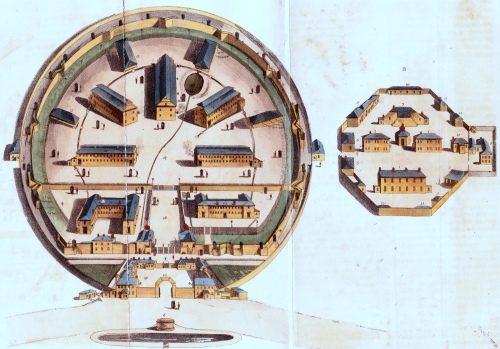 At home there were reports in the papers of the inquests on seven American prisoners of war shot attempting to escape from Dartmoor prisoner of war camp, a bleak institution high on the moors. The print above is from Ackermann’s Repository in 1810 when the prison was newly built. The smaller enclosure to the right is the barracks for the troops guarding the prisoners.
The court and fashionable news included the scandalous information that the Consistory Court had “pronounced a sentence of divorce in favour of Lord Roseberry, on the grounds of adultery between Lady Roseberry and Sir H. St. J. Mildmay.” The case was so splendidly lurid that I think I will have to devote an entire post to it later. When the bill of divorce reached the Committee stage in the House of Commons in June, the question of Lady Roseberry’s allowance from her husband arose:
According to Hansard, “Mr. M. A. Taylor rose and said, he did not think the sum proposed in this clause sufficient to provide Lady Roseberry with the common necessaries of life. He was one of those who could not accede to…an opinion…that after a woman has committed an act of adultery, she ought to be turned naked into the streets, without the means of sustaining existence…He would appeal to the feelings of the House, whether it was; possible for Lady Roseberry, after the splendour in which she had been accustomed to live, to support herself upon the miserable pittance of 300l. per annum. It might be said, that this limited income must be considered as a part of the punishment of her crime.”
On Monday the Morning Post writes of receiving a report “of a petition of peace with Bonaparte been clandestinely circulated for signatures in the City of London. We cannot believe this rumour or that any considerable number of citizens would put a their name to so degrading a paper.”
In the House of Commons Mr. Bathurst proposed an Aliens Act to protect against subversive French aliens. It was rejected as unnecessary – apparently the House shared the Morning Post’s opinion of the loyalty of British citizens.
A proclamation from King Louis XVIII to all French citizens was widely reported. He promised to welcome back “into his arms” all who had previously supported Napoleon and warned that “already does Europe advance to dethrone him. She advances Frenchman! Her innumerable phalanxes will soon pass your frontiers…”
Under the heading “Pugilism”, the Morning Chronicle stated on Wednesday that “for years we have not had to report a fight so determined and so desperate

as that which brought together by amateurs yesterday on Hounslow Heath, between Harry Harmer, of first rate science, and Shelton the navigator.” The vast crowd watched 28 brutal rounds lasting 26 minutes ending in the defeat of Shelton following “a dreadful blow to the side of the head.”

The print Road to A Fight by Henry Alken (1821) shows the sporting gentlemen all rushing to the ringside.
To end on a rather more sophisticated note, the papers were enthusiastic about the Marchioness of Landsdowne’s Rout. “Landsdowne House was opened on Thursday night to nearly the whole of the Fashionable world. That magnificent mansion appeared in all the blaze of meridian splendour; its interior embellishments never appeared to greater advantage. All the beautiful apartments notwithstanding their majestic proportions, were filled with beauty and elegance… At midnight the scene was at its zenith; at one o’clock a few began to retire, and about three the party broke up.”
Guests included five ambassadors and what reads like all the nobility in residence in London. The print is from Ackermann’s Repository for May 1811 and is captioned, “Landsdowne House, Berkley Square.

4 responses to “The Road to Waterloo – Week Eight. The Tricolour Floats Throughout the Empire – and Is Lady Roseberry To Be Turned Naked Into the Streets?”