The Georgians were great believers in educational games and I own a battered and much-used copy of one of them – Wallis’s Tour Through England and Wales: A New Geographical Pastime, published in London in 1794. 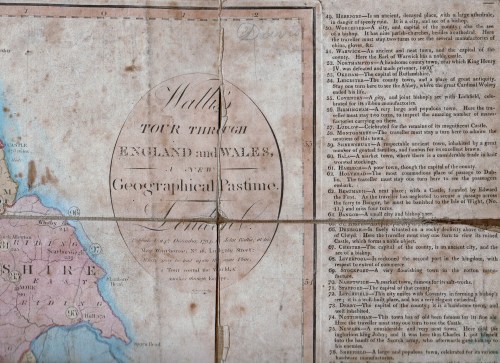 The whole game measures approximately 500 x 630mm (20 x 26 inches) and is made up of 16 sections glued to a flexible backing. It folds up neatly into a slipcase approximately 175 x 140cm (7 x 4.5 inches). The slipcase has an imposing image of scrolls, flags and military drums on it, but it has had such a hard life that it is impossible to scan. There was another version of the game for Europe (on sale on the internet at over £1,000, I see) and one for the whole world. Unfortunately I doubt my battered copy of England and Wales is worth anything like that!

The same plate was also stuck onto wood and cut out so that each county formed a piece of a jigsaw – or dissected puzzle as they were known at the time. The children of George III played with these puzzles which survive at Kew Palace and can be seen here.

The instructions tell us that 2 to 6 “may amuse themselves with this agreeable pastime” for which they will need a “totum” and a pyramid (presumably some kind of marker) and four counters per player, each set in a different colour. A totum was a teetotum, a spinning top with a variable number of faces. I can recall making one as a child out of card cut as a polygon with a cocktail stuck through the centre. There are some lovely ones illustrated on this website.

Players spin the totum and the highest score starts. With their first score they place their pyramid on the corresponding town – 1, for example, would land them at Rochester. On their next turn they move on the number of towns they have scored – say 6 –  which would give them 7 and they can then move to Lewes, number 7 on the map. The winner is the first to reach London with exactly the right number. If a player exceeds the right number then he has to count backwards from London.

Each numbered town has a short description in the margins and some of these have a delay  involving missed turns. When a player lands on one of those they must deposit the stated number of counters and have to miss the next turn, or turns, until they have collected them back up again. (see 50. Worcester, in the top right hand corner of the first image). Presumably each player would be expected to read out the description of the towns they land on for the instruction of all the participants. 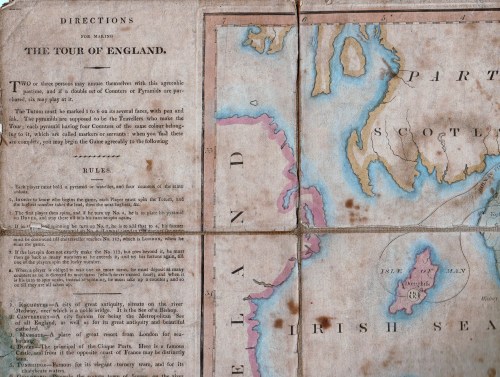 If you landed on 89, The Isle of Man, you would be shipwrecked and out of the game!

7 responses to “A Georgian Parlour Game”