The Story of a Square 3: Lincoln’s Inn Fields 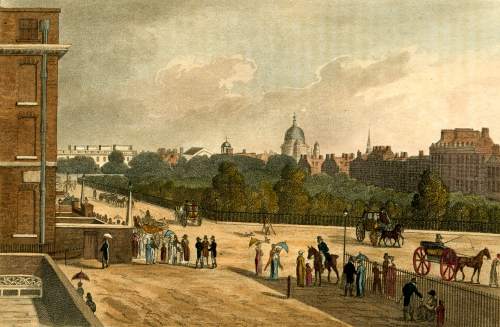 Lincoln’s Inn Fields is the largest square in London and records exist concerning it from the 14th century when it really was a field – or rather, two – Purse Field and Cup Field. They adjoined the west wall of the grounds of Lincoln’s Inn, one of the four Inns of Court, and were the natural playground for the legal students’ ball games. The survival of this vast open space in the middle of the city, surviving Stuart property developers and massive Victorian road improvements and slum clearance, is due to an early example of NIMBYism.

In the Middle Ages, and well into the 17th century, there was nothing resembling a civilized park – the fields were leased out as pasture and, occasionally, used as places of execution. In 1586 the Babington Plot conspirators were hanged, drawn and quartered there, Catholic martyrs were burned in the 1580s and Lord Russell was beheaded in about the centre in 1683 for his involvement in the Rye House Plot.

As London expanded outwards developers began to cast an eye over such a tempting expanse of open ground and the first attempt to build a house there was in 1613. This was successfully resisted by the Society of Lincoln’s Inn – lawyers powerful enough to influence the government on the subject. It was clear that improving the open space would assist in preserving this asset, so the Society and the neighboring parishes petitioned Charles I in 1617 that “for their general Commoditie and health [the fields should be] converted into walks after the manner of Morefeildes.” The proposal appealed to the King and the Privy Council supported the scheme “as a means to frustrate the covetous and greedy endeavors of such persons as dailye seeke to fill up that small remainder of Ayre in these parts with unnecessary and unprofitable Buildings.” Resistance to developers seems to be as strong then as it it now.

Neither development nor improvement as an ordered public space happened immediately, but in the 1630s the leaseholder of the fields petitioned the King to allow the building of 32 houses. After some wrangling the permission was granted but the developer agreed that the centre of the area was  “for ever and hereafter to be open and unbuilt.” The houses were built by 1641 and the area became a fashionable place to live despite the Fields themselves being a dangerous place with fights and robberies (and the odd execution) commonplace.

In 1716 John Gay wrote  in Trivia that, despite the square being railed, it was unwise to venture in at night. The beggar that the benevolent pedestrian had given coins to during the day would turn his crutch into a weapon at night “and fell thee to the ground” and the linkboy offering to guide him through the area will lead him into the clutches of robbers and “quench the flaming brand and share the booty with the pilfering band.”

Nell Gwynne had lodgings here, and another of Charles II’s mistresses, the Duchess of Portland, had a house. Numerous aristocrats, politicians and high-ranking lawyers lived around the Fields in the 17th, 18th and 19th centuries but the person whose name is nowadays most closely associated with the square is the architect Sir John Soane. His house is now one of the most atmospheric and eccentric museums in London and is located in the middle of the north side. The print at the top of this post, from Ackermann’s Repository, shows the view from the north-west corner in 1810 and you can get more or less the same view today by standing at the point where Gate Street and Remnant Street enter the Fields. (The Remnant name reflects the fact that this was once the end of Great Queen Street before the Victorians drove Kingsway through the tangle of medieval streets to the west of the Fields.)

The tall buildings to the right of the print occupy the site of what is now the Royal College of Surgeons which contains the extraordinary Hunterian Museum, a fascinating, if gruesome place to visit for anyone interested in the history of surgery and anatomy.

Lincoln’s Inn Fields is included in Walk 7 of Walking Jane Austen’s London (an excellent stocking-filler for any history buff’s Christmas stocking!) As well as the two museums there are still a number of fine 18th century houses and the gardens themselves to enjoy – open to the public since 1894.

2 responses to “The Story of a Square 3: Lincoln’s Inn Fields”