The Earl of Wittering Goes to the Seaside Part 8: Porrett Takes to the Waves 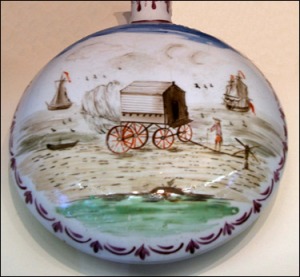 The Earl of Wittering’s extended family have all decided that they will try being ‘dunked’ in the sea in the interests of their health, although their enthusiasm for the exercise varies considerably. Young Arthur is eager to observe jelly fish (although he has the tact not to mention them in front of his female relatives), his father, Viscount Ditherstone, is keen to catch a glimpse of any ladies bathing, while the Viscount’s father, the Earl, is grimly determined to suffer for the sake of his digestion, even if that means drinking sea water too.

The ladies are nervous (except Miss Emily) so Porrett, the Earl’s secretary, decides to take an early morning dip to test out the bath house and its facilities himself. He sneaks out early, unaware that Emily has heard him discuss this with the butler. She has armed herself with a telescope and is in position at her bed chamber balcony… (Emily may like to think she looks like the dashing female in the La Belle Assemblée print of October 1809 but unfortunately she is in a very modest gown).

The bath houses control the bathing machines and, although there are over thirty at Weymouth, it is still necessary to register at the bath house and wait to be summoned when one is free. The bath house also provides hot and cold baths, plunge baths, showers and elegant waiting rooms furnished with newspapers, journals and telescopes.

Bathing is normally carried out before noon, but even so, Porrett is so early that he secures a bathing machine immediately, pays one shilling and sixpence (the sixpence covers his ‘guide’ or ‘dipper’) and follows the man down the steps and across the sand to a bathing machine.

Porrett is a confident swimmer who has swum many times in the sea, so he doesn’t really need a guide, but he feels it his duty to examine the quality of the personnel. Nor does he need dipping – being thrust beneath the surface three or four times to ensure total contact with the health-giving ‘briny fluid’. He climbs the three steps at the back of the machine – really only a hut on large wheels, just over six foot long and not much taller – and lets himself in. Inside it is gloomy, lit only by slats set high in the walls, so he undresses more or less by touch, lurching to sit down with a thump on the bench when the horse between the shafts begins to pull the machine down the beach.

There are plenty of hooks for his clothes, he is glad to see. Porrett has nothing to change into, for it is considered positively effeminate for a man to swim wearing any kind of garment, and he winces as his bare feet come into contact with the sodden strip of carpet on the wooden floor and reminds himself to suggest that the ladies wear light sandals. There is more lurching as the machine enters the water, sounds of the horse being unhitched and led away, then a rattle and a splash as the hood is lowered to give him privacy. This hooped canvas device was invented by Mr Beale, a Margate Quaker, to ensure the modesty of bathers entering the water.

‘All ready, sir!’ the guide calls and Porrett lets himself out of the seaward door onto the top step. 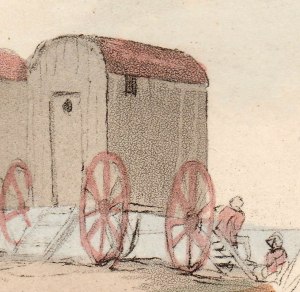 He waves away the guide with some confidence. ‘I can swim, thank you,’ and plunges in, shuddering at the first shock of cold water. He surfaces within the cover but the space it encloses – about 10 by five feet – is too restricting and he ducks underneath and strikes out strongly.

Up on her balcony Miss Emily felt a most unmaidenly pang of disappointment when she saw the hood being let down on the only machine in operation. She almost turns away, then a dark head appears, seal-like, and she focuses the telescope. It is Porrett! Frederick, as she thinks of him. How strongly he swims. Her heart is positively fluttering and then he stops and… stands up. Frederick, she realises, has admirable shoulders and very trim waist and… Oh, the lens has steamed up.

Porrett spots two ladies walking their dog along the beach, so he hastily dips below the surface and swims back to the machine. Everything seems to be in order so he will reserve machines and dippers for the entire party before he goes back to breakfast, he decides. He dries himself on the scratchy towel provided (Note to self, remind the ladies to bring their own) and dresses with more difficulty than he stripped off as the machine lumbers back up the beach.

Emily hastens to return the telescope to her grandfather’s study, fanning herself with her free hand as she does so. Her slight tendre for Porrett is developing into something altogether more serious. He is so manly…

What will happen when the whole family goes to the beach? Can Emily arrange things so that Porrett comes too? Will the Viscount get his face slapped for leering at bathing beauties? How will the Earl’s indigestion respond to a dunking?

7 responses to “The Earl of Wittering Goes to the Seaside Part 8: Porrett Takes to the Waves”