The Earl of Wittering Goes to the Seaside. Part 3 – Where to Stay?

‘Well?’ The Earl of Witting glares at his  unfortunate secretary making Porrett drop the pile of paperwork he is juggling. ‘Here we are in June already – where have you found us to stay in Weymouth?’

[Porrett would have used a local agent, like this modern Weymouth estate agent. Or consulted advertisements in a guidebook or the local newspapers]

‘As you know, my lord, I returned yesterday and I have fully reviewed the options. There are boarding houses, where meals and domestic services are included in the charge. Meals would be taken communally, however and I am not certain large private drawing rooms will be available…’ 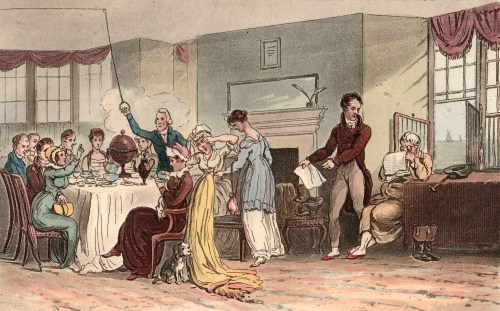 ‘Communally! Have you taken leave of your senses, Porrett? Gatwicks do not take meals communally. Heavens knows what type of people one might encounter – medical men, clergy – ‘ (A nasty dig that, Porrett’s father is a clergyman) ‘ – merchants, even!’

[Above: a communal breakfast at a boarding house by J Green, etched by Rowlandson, in Political Sketches of Scarborough]

‘Quite, my lord. I dismissed those. Then there are lodgings where one might take a floor or the entire house. The lodgers would have to provide their own servants and cook, however, or rely on paying extra for whatever the landlady has to offer.’ The earl is becoming puce in the face, so Porrett adds hastily, ‘I assume you would be taking Gaston with you?’ Always assuming the French chef would condescend to cooking in an unknown kitchen.

‘Of course we are taking Gaston, unless I can rely on decent food. What about these hotels one reads about? Jumped up inns, eh?’

‘So I understand, my lord, although apparently some are being created with er, new facilities.’

‘Facilities? I should damn well hope they have facilities!’

‘No, my lord, I mean sanitary facilities. Water closets.’

‘Outrageous! Probably most unhealthy. What’s wrong with a chamber pot? So, does Weymouth have hotels?’

‘Not that you would find acceptable, my lord. I feel that lodgings might be most suitable. My researches show that there are, at present, one hundred and eight lodging houses.’ [Standardized rows of houses were built for lodgings, as these, below, in Weymouth probably were – and they still are ‘lodgings’ today]

The colour of his lordship’s face, which had begun to subside, becomes more vivid as Porrett hastens to explain, ‘I have reduced the number to six, my lord.’ And now, the question he has been aching to ask, the question that will tell him whether his summer is to be spent labouring in London on the receiving end of his lordship’s demands by post or whether, oh bliss!, he is to accompany the family. The family and Miss Emily. Emily with her dark curls and blue eyes, Emily with her rosebud mouth and the freckle just on the –

He pulls himself together. ‘How many chambers will be required, my lord? I collect that Viscount Dithermore and his family are to accompany you and the Countess, but will you require me with you, my lord. Or do I remain here?’

‘Hah! Leave you to frivol your time away in Town? The mice at play while the cat’s away? No, you will come with us, Porrett.’

It is hard for Porrett to keep the blissful smile from his lips. ‘I have the perfect house, in that case, my lord. On the Esplanade, newly built with a fine balcony on the principal floor to give views of the sea.’ And a little balcony on the floor above. As soon as he saw that little wrought iron confection he could imagine Emily standing upon it, the breeze stirring her hair as she turned to him. ‘Oh Porrett, Frederick… I have long lov-‘ 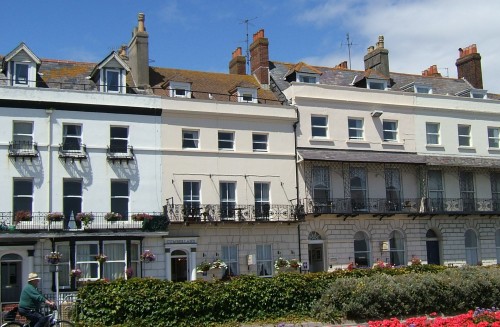 [Above: could this be Porrett’s romantic little balcony (left?) I’m not certain it would take the weight of two lovers… Houses on Weymouth’s Esplanade]

‘Then reserve it! Don’t stand there with that look on your face like a distressed halibut! We leave within the week.’

What will the journey be like? Will Gaston condescend to accompany them? Will Emily even notice Porrett? Find out in the next installment and meanwhile read about the vibrant world of the early English seaside holiday  in  The Georgian Seaside: the English resorts before the railways came. 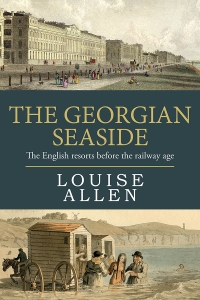 3 responses to “The Earl of Wittering Goes to the Seaside. Part 3 – Where to Stay?”