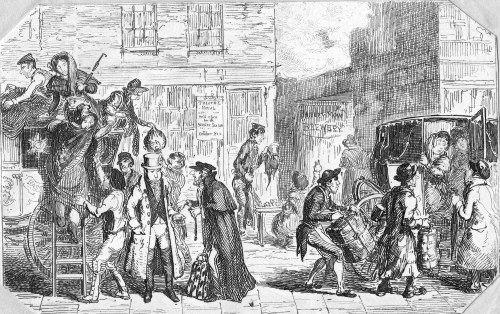 The Cruickshank print for October shows the end of the summer for Londoners – the return home from their holidays, probably at the seaside. One party are disembarking from a mail coach on the left while on the other side a family are getting out of a hired post chaise. The new season is indicated by the man selling a pheasant in the centre and the poster for the start of the Theatre Royal’s winter programme.

These travellers are very much of the ‘middling sort’, respectable tradespeople or perhaps lawyers or merchants. A decade or so before and they would not have dreamed of taking a holiday – that was reserved for the upper classes and aristocracy, people with an income they did not have to work for, and ample time on their hands. But times were changing and improvements in transport, as well as changes in society, meant that the middle classes could manage to get away to perhaps Margate or Folkestone or one of the other growing resorts along the South and South East coasts.

The other print is from over twenty years earlier and shows the journey back to Town from the other end – The Departure is the final print in Political Sketches of Scarborough by J Green, illustrated by Thomas Rowlandson. The lady in her fashionable travelling outfit is sheltering from the rain while her luggage is loaded onto a hired chaise – 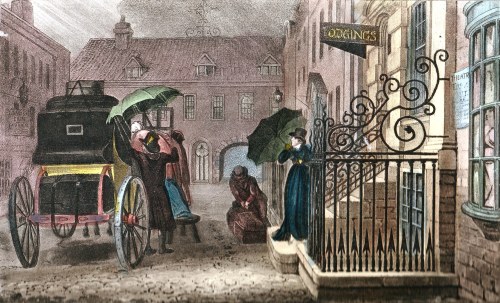 one of the “yellow bounders” famous for both colour and the wild swaying of their springs. She seems to be of a  higher rank than the unsophisticated travellers in the Crucikshank image and the verse indicated that she is following the lead of the most elevated visitor to Scarborough that season:

The chilling winds and rain combine,

That all should Scarbro’s sweets resign;

First one by one – then four by four,

And then they’re off by half a score;

Her GRACE is gone – with her a host

Of charms to captivate, are lost:

When she withdraws her genial ray,

The sun has set of Scarbro’s day.

3 responses to “October In London”