The Old Goat of Piccadilly 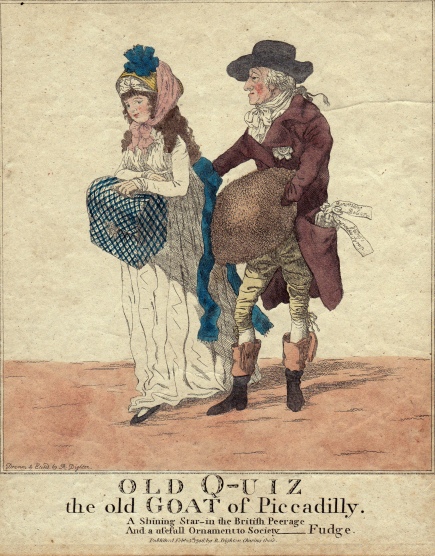 The unprepossessing character above is William Douglas, 4th Duke of Queensbury, otherwise known as Old Q or, as this print published in 1796 when he was 71 years of age, puts it, ‘The Old GOAT of Piccadilly.’

His Grace was every bit as dissolute and dissipated as this print shows him. He had a long life – 1725-1810 – and, as Jerry White says, he was ‘one of the most outrageous gamblers and sybarites of his own or any other age.’ (London in the 18th Century). He succeeded his father as Earl of March in 1731 and was known for most of his long and scandal-filled life by that title, only inheriting the dukedom on the death of his uncle in 1786. He was a passionate gambler, so it was fortunate that he was incredibly wealthy. In 1750 he bet that he could make a four-wheeled carriage drawn by four horses and carrying one man cover a nineteen mile course in one hour. This was considered impossible but, by throwing money at it, the earl had a series of experimental carriages made, each stripped down to nothing more than a basic framework. The harness was made of silk and whalebone and the unfortunate groom driving it had virtually nothing to cling to. He won in a time of 53 minutes 27 seconds. His other notorious bet was that he could send a letter 50 miles in an hour which he achieved by putting it in a cricket ball and having twenty bowlers stand in a measured circle throwing it from one to another continuously.

Throughout his adult life the duke was a passionate pursuer of women, especially actresses to whom he was exceedingly generous, for example building Kitty Frederick a house at 135, Piccadilly next door to his own at 138. He never married but, not surprisingly he had numerous illegitimate children.  In 1795 he had the woods around Drumlanrigg and Neidpath castles in Scotland felled and sold to provide a dowry for Maria Fagniani whom he believed to be his natural daughter. (She did rather well financially – George Selwyn left her a fortune under the impression that she was his child!)

Felling the forests made him the enemy of Robert Burns – ‘The worm that gnawed my bonny trees, That reptile wears a ducal crown…’ and William Wordsworth  – “Degenerate Douglas! Oh the unworthy Lord!”

Old Q’s interest in women did not diminish with age and he became what we would now probably call a sex pest, driving around with a groom whose job it was to get down from the carriage and take notes to any young woman who caught his master’s roving eye. He would walk along Piccadilly, accosting women as he went and when he became too elderly for that he retreated to the balcony of his house and winked at women as they passed.

He was famous for his huge muff, shown in this print. Two medicine bottles are poking out of his pocket, one labelled “Renovating Balsam” the other “Velno’s vegetable syrup.” Presumably these are to revive his flagging energies. The caption reads:

A Shining Star – in the British Peerage

And a usefull Ornament to Society___Fudge.

9 responses to “The Old Goat of Piccadilly”