Jane Austen by Candlelight – or was it a lamp?

In September 1813 Jane Austen was staying with her brother Henry at his Henrietta Street address in Covent Garden, along with their brother Edward, his daughter Fanny and two of Fanny’s younger sisters. On the 16th Jane wrote to her sister Cassandra, ‘We are now all four of us young Ladies sitting around the Circular Table in the inner room writing our Letters, while the two Brothers are having a comfortable coze in the room adjoining.’ 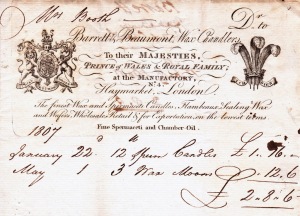 It is a charming picture, but how were the four ladies illuminating their work? Probably not with smelly tallow dip candles, unless they were in an economical mood. Those were made from mutton fat, usually contained bits of meat, smelled strongly and, in homes with any pretence to gentility, were 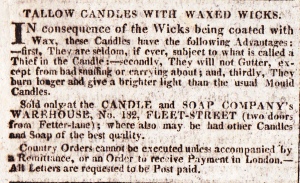 confined to the service areas.

There was an “economy” candle available – tallow with a wick that had been dipped in wax which must have reduced the smell a little and, according to The Candle & Soap Company’s advert of August 1802 shown left, (The Statesman newspaper), would not “Gutter except from bad handling or carrying about.”

However, we know that the Austens bought pure wax candles from Penlington’s, a tallow chandlers at the sign of the Crown and Beehive, Charles   Street (now Wellington Street), a short walk from the Covent Garden piazza and Henrietta Street. It evidently produced superior candles, for the family would order from them by mail: on 1 November 1800 Jane tells Cassandra, who has just passed through London on her way to Kent, that their mother was ‘rather vexed’ because Cassandra did not call at Penlington’s but that she had sent a written order, ‘which does just as well.’

I don’t have a bill from Penlington’s, but the one shown at the top is from the very smart shop, Barrett & Beaumont, Wax Chandlers to Their Majesties – you can see the royal coat of arms to the left and the Prince of Wales’s feathers on the right, denoting the royal warrents.  The bill, for two pounds eight shillings and six pence is for twelve candles – I think it says “sperm” for spermaceti (ie whale oil) and three “Wax Moons”, which are a mystery to me.

A single candle, or even a branch of candles, does not produce a very bright light, so for detailed work there were methods of focusing and concentrating the light. One method was to place a glass globe filled with water in front of the flame and this photograph (right) shows a device for giving a group of sewers stronger light from just one candle. (Birmingham Museums Reserve Collection).

The first lamp designed on scientific principles was the Argand lamp, patented in 1780. It used a wick drawing on a reservoir of whale (spermaceti) or vegetable oil and they were made in very handsome designs in silver or in Sheffield plate. The photograph (left) is of one at Soho House, Birmingham, the home of Matthew Boulton, the manufacturer. This particular pattern is silver plate, of about 1800.

Soho House also contains another lamp by Matthew Boulton & Plate Company, this time of c.1820 (shown below). It is a neat little bedside lamp made to burn colza (rape seed) oil. With our frequent power cuts out here in the country I rather covet this little lamp.

If anyone knows what a “wax moon” might be, I’d love to hear from you!

19 responses to “Jane Austen by Candlelight – or was it a lamp?”